In 2010, Ami Dodson was diagnosed with stage two breast cancer and underwent a partial mastectomy to remove the cancer. Her oncologists suggested they follow up with chemotherapy treatments using a drug known as Taxotere. Her prognosis was excellent and there was every expectation she would live a normal life. 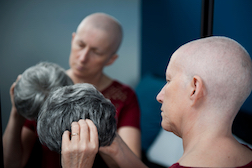 Dodson expected that her chemotherapy treatments might cause her hair to fall out, however, she was not expecting that the hair loss would be permanent. She is now one of thousands of women in the US who have reported permanent hair loss after receiving a chemotherapy drug known as Taxotere.

“I have a lot of women, including young women, and they are just devastated now because they have permanent alopecia or a lot of hair is missing and it is not going to grow back and it’s because of Taxotere,” says Dubrovsky. “It actually kills the hair follicles, it completely destroys them.”

Taxotere is the brand name for Docetaxel – one the Taxane variety of drugs used in chemotherapy that were originally developed from the yew tree. According to the Cancer Research UK, Taxotere is delivered intravenously and stops cancer cells from multiplying thereby blocking the growth of new cancer cells.

It is manufactured and marketed by Sanofi and Aventis Pharma and Sanofi-Aventis U.S pharmaceutical company and was originally approved by the FDA in 1996.

According to the documents Sanofi (as it is now known) promoted Taxotere as more effective than another competing drug known as Taxol.

Had Taxotere been the only option the women perhaps would have accepted the hair loss risk. However a 2008 New England Journal of Medicine study showed that Taxol was as effective as or more effective than Taxotere.

“It was marketed as an alternative to another medication which would have worked just as well,” says Dubrovsky. “I doubt any of these women would have accepted Taxotere as a chemo therapy treatment if they knew they risked suffering permanent hair loss. They received no warning. Even doctors didn’t know about this nor did their patients.”

More TAXOTERE HAIR LOSS News
Dodson and hundreds of other American women are now suing the drug maker. In the court documents filed Dodson’s statement of claim alleges the drug maker “misled the plaintiff, the public and medical community to believe that, as with other chemotherapy drugs that cause alopecia (hair loss) the patients hair would grow back”.

According to the documents the “defendants knew or should have known that the rate of permanent alopecia related to TAXOTERE® was far greater than with other products available to treat the same condition as Defendants’ product.”

“This is devastating for women, especially for professional women,” says Dubrovsky. “One of my clients is a real estate agent and they have to meet face to face with clients on a regular basis and now they have to wear wigs and so on. This has damaged their professional image.”


Dodson’s case is now part of a consolidated litigation against Sanofi in an MDL in Louisiana.