Since having six rounds of chemotherapy treatment with Taxotere Sharon and Glenna have been wearing expensive hair pieces. Both women have their eyebrows tattooed. Both women finished chemo years ago and their hair never grew back. 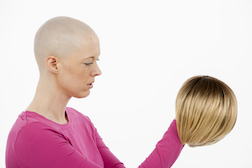 “My hair is so thin in the front of my head that you can see my scalp and I have bald patches throughout,” says Sharon. “I no longer have any bangs and my hair in the front is so thin and brittle that I can barely clip my hairpiece to it.” Sharon also had her eyebrows tattooed and she has “very sparse eyelashes” but eyelash extensions are expensive. Both eyebrow tattoos and eyelash extensions often require maintenance.

The news of losing your hair permanently is likely devastating. Heidi Hare, a breast cancer patient told Vancouver Metro that, faced with the prospect of losing her hair, she “went home, drank a bottle and a half of wine, ate cupcakes for dinner and had a pity party.

Hare visited West Coast Wigs in Vancouver and discussed her options. A wig made from human hair will set you back more than $2,000, while a synthetic-human blend is considerably less. But most women with alopecia need to buy another wig after about two years. “About 85 percent of my clients are chemo patients,” says owner Lynda Smith, “and every one of them are devastated. Their loss of hair is the worst part of the treatment, and to suffer permanent hair loss is too sad.”

“Since undergoing chemo with Taxotere back in 2003 I have visited many medical and cosmetic facilities to determine why and what could be done to halt my hair shedding,” said Glenna in an email. “I no longer have any hair on my body except for a few eyelashes. I’d like to get eyelash extensions but after paying $700 for eyebrow tattoos—and they require maintenance, I can’t afford much more. Unfortunately I don’t have extended medical insurance.”

Glenna predicts she won’t have any hair left in the near future. “No one to this day, not even my oncologist, ever told me about Taxotere side effects,” she says. “I just saw something on TV about such litigation. At the very least I would appreciate some compensation for these necessarycosmetic costs. I find this harder to take than the actual surgeries.” Glenna is also having financial hardships: she has been on disability ever since her cancer diagnosis.

“Up to 75 percent of cancer survivors have had eyebrow tattoos, simulated eyebrows (tattoos) or augmented the eyebrows they have, says Kyla Gutsche, at the Medical Centre in Peterborough, Ontario. “The cost is over $1,000 plus another $130 in taxes.

Why can’t wigs and tattoos for cancer patients be classified as prostheses and help cancer survivors financially by giving tax breaks?

More TAXOTERE HAIR LOSS News
“If these ‘cosmetic’ costs were covered I would feel relieved,” says Sharon, who works in sales for a major food company. “And I would feel better if the government realizes cancer isn’t over after chemo. Even if they covered a portion of the costs, that would help. I got a tax benefit from my prosthesis and I believe wigs and tattoos should be considered prosthesis. And it should be an instant reduction, not just a tax rebate.”

Sharon bought a wig for $1,700 (her employer kicked in $500) and two ‘wiglets’ for an additional $2,300. “When I went back to work I wanted to look normal and not look like a cancer patient wearing a scarf and hat,” she explains. “The wig helped my self-esteem. I wore it every day. A year after chemo I paid $700 for eyebrow tattoos but they don’t last forever.”

Sharon and Glenna are seeking legal help. At the very least the Taxotere manufacturer should reimburse them for these cosmetic prostheses.

Posted by
susan
on December 27, 2016
i recieved a call telling me that the lawsuit is only available to american residentsis there no help for canadian women who have ongoing sufferin from this drug?