Four years ago David had triple bypass heart surgery and he has been suffering from infections ever since. “Nobody could tell us why he was getting so many infections, until we got a letter from the hospital that said this Stockert 3T heater-cooler system used during surgery is linked to a rare bacterial infection,” says Shelly, David’s wife. 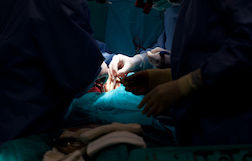 “Right after his heart surgery, David got a lung infection that put him back in the hospital, and he catches pneumonia at the drop of a hat. But they just prescribe more antibiotics and steroids.” David, age 69, has now been diagnosed with COPD, or chronic obstructive pulmonary disease, and is on oxygen 24/7. He is also taking 60mg of morphine, four times a day. Shelly says that David didn’t have COPD before his heart operation.

“The letter from the hospital says that the Stockert heater-cooler device was used in the operating room, that this medical device is linked to NTM [nontuberculous mycobacteria], and that only one percent of patients get it,” says Shelly, “but I believe that David is that one percent. They listed all the symptoms, and all apply to David: night sweats, muscle ache, weight loss, fatigue, unexplained fever and a lot of pain. He has had chest pain ever since his surgery and that’s why he’s on morphine.”

Shelly and David tried to get answers from the hospital. The only explanation they got was that David has COPD because he smoked (he kicked the habit just before his heart surgery) and no one, not even their GP, addressed their concern about infections.

Both the Centers for Disease Control and Prevention (CDC) and Health Canada have warned healthcare providers and patients about the potential risk of infection from heater-cooler devices used during open heart surgery, specifically “This advice follows new information indicating that some LivaNova PLC (formerly Sorin Group Deutschland GmbH) Stöckert 3T heater-cooler devices, used during many of these surgeries, might have been contaminated during manufacturing which could put patients at risk for life-threatening infections.”

“Right after we got the letter, I took David to our doctor but he did nothing. That is why I went online to find out more about this Stockert system and its link to M. chimaera infections,” Shelly says. “When I saw so many Stockert 3T heater-cooler lawsuits, my first thought was that maybe we can get some kind of compensation for these four years of grief. We weren’t financially prepared for this. I had to quit my waitressing job to be David’s caregiver and we only get our Old Age Pension.

I could show you pictures of David water skiing, that were taken just before his surgery—he was always out and about having fun. Now he can’t do anything and some days he can’t even get out of bed. We are just scraping by, barely keeping afloat.”

More STOCKERT 3T News
The Health Canada warning says that patients who have been exposed to the bacteria Mycobacterium chimaera (a slow growing NTM) through open-heart surgery “can develop general and nonspecific symptoms that can often take months to develop. As a result, diagnosis of these infections can be missed or delayed, sometimes for years, making these infections more difficult to treat. There is no test to determine whether a person has been exposed to the bacteria. Infections can be diagnosed by detecting the bacteria by laboratory culture; the slow growing nature of the bacteria can require up to two months to rule out infection.”

It also says that NTM infections potentially associated with heater-cooler devices have been diagnosed months to years after cardiothoracic surgery, and that the vast majority of reported NTM cases were associated with the Stockert Heater Cooler System 3T manufactured by LivaNova/Sorin.

Posted by
Lorna L Hallam
on January 24, 2022
My husband had open heart surgery at Saddleback Memorial Hospital in November 2012 and has been plagued with infections since and has subsequently passed. We were vacationing in Laguna Woods when he became ill and was operated on immediately, we are from Canada and did not receive any information about this issued. He did get infection almost immediately following the operation. Can you contact me as I believe this could have caused all his health issues.