Three University of Melbourne researchers have recently published a letter to the editor in the New England Journal of Medicine voicing concern that thousands of patients worldwide could be exposed to contaminated medical devices. 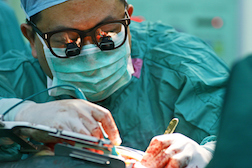 "Our observations highlight the potential for global dissemination of contaminated medical devices, including to regions such as Australia and New Zealand," the authors wrote.

The Stockert 3T heater-cooler system, which helps regulate a patient's body temperature during surgery, has been linked to infection during certain surgeries.

"Infections have been publicly reported in five countries, and it has been noted that these infections developed after the Stockert 3T heating and cooling unit manufactured by Sorin Group Deutschland (now LivaNova) had been used to regulate the body temperature of patients during coronary-artery bypass grafting," wrote the authors.

Between May 2015 and July 2016, a total of 48 presumptive M. chimaera isolates, which can lead to infection, were obtained. The tests found that 43 were from Stockert 3T heating and cooling units and 5 were from patient samples, according to the editorial letter.

The Melbourne researchers closed the letter with a call for public sharing of research data for the sake of the public health:
"These data show the value of combining high-resolution molecular analysis and public sharing of sequence data to improve responses to outbreaks that have potential public health importance."