The basket of Monsanto Roundup lawsuits has grown, with another class action launched June 20 of this year in Wisconsin (Blitz et al. v. Monsanto Company et al., Case No. 3:17-cv-00473, United States District Court, Western District of Wisconsin). In this most recent claim, plaintiffs from Wisconsin, Illinois, California, New York, New Jersey and Florida assert that the product is marketed in a false and misleading manner. 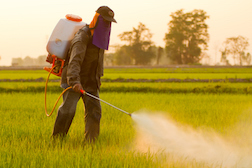 According to the lawsuit documentation, the action centers on glyphosate, which first appeared on the market in 1974 at the active ingredient in the Roundup family of herbicides, and promoted as an effective proactive strike against pests and other entities that would otherwise decimate crops.

Various lawsuits allege that Monsanto Roundup causes cancer, with that assertion tied specifically to glyphosate. Monsanto has long stood behind glyphosate as safe for humans and pets, and denies the herbicide is a carcinogen. The debate as to whether, or not glyphosate is, indeed a carcinogen continues to swirl.

It should be noted that Blitz et al v. Monsanto Company et al differs from the majority of previously-filed Monsanto Roundup lawsuits in that plaintiffs do not claim physical injuries, as do other plaintiffs who allege diagnoses of Non-Hodgkin’s Lymphoma can be traced to use of Roundup herbicide and, specifically, glyphosate.

Rather, plaintiffs assert that Roundup has been falsely promoted and marketed, in relation to the manufacturer’s claim that glyphosate targets a specific enzyme Monsanto asserts is not found in humans or pets – and thus, would be deemed safe.

The Wisconsin lawsuit, however asserts that glyphosate can actually target an enzyme found in gut bacteria in both humans and animals. As such, glyphosate is capable of disrupting the immune system, normal digestive function, and brain function.

The Wisconsin plaintiffs, therefore, accuse Monsanto and co-defendant Scotts Miracle-Gro Co. of false and misleading advertising and marketing with regard to assertions that glyphosate is safe for people and pets. Plaintiffs argue glyphosate is not safe for people and pets, and thus accuse Monsanto and Scotts of committing various violations to laws governing trade and business practices.

The lawsuit, proposed as a class action, names various studies to support claims made by plaintiffs, including a study titled “Concerns over use of glyphosate-based herbicides and risks associated with exposures: a consensus statement”, and published February 7 of last year in Environmental Health by John Peterson Myers and fellow researchers who studied exposure to glyphosate-based herbicides (GBH).

“Existing data, while not systematic, indicate GBHs and metabolites are widely present in the global soybean system and that human exposures to GBHs are clearly rising,” the study authors wrote, in their conclusions. “Tolerable daily intakes for glyphosate in the US and Germany are based upon outdated science.

More MONSANTO ROUNDUP News
“Taken together, these conclusions all indicate that a fresh and independent examination of GBH toxicity should be undertaken, and that this re-examination be accompanied by systematic efforts by relevant agencies to monitor GBH levels in people and in the food supply, none of which are occurring today. The US National Toxicology Program should prioritize a thorough toxicological assessment of the multiple pathways now identified as potentially vulnerable to GBHs.

“The urgency of such work was reinforced in March 2015 when the IARC [International Agency for Research on Cancer, World Health Organization] concluded glyphosate is a probable human carcinogen,” the study authors conclude.

The lead plaintiff in the proposed Monsanto Roundup class action is Thomas Blitz from Wisconsin. Co-plaintiffs are named as Kevin Blair from Illinois, Gregory Chick from California, Mario Washington who hails from New York, Terrence D. Moore from New Jersey, and Richard J. Dulniak from Florida.