A group of seven farmers are the lead plaintiffs in a class action lawsuit that claims “corporate greed” and “a rush to market” by some of the world’s biggest makers and promoters of agricultural chemicals caused farm crops to wither and die costing farm operators millions of dollars in lost revenue and possibly forcing them to switch all their seed stock to herbicide resistant Monsanto seed in the coming years whether they want to or not. 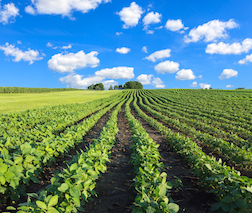 “This is an issue we have been watching for over a year,” says attorney Paul Lesko, from the St. Louis, Missouri firm of Peiffer Rosca Wolf Abdullah Carr & Kane which represents the plaintiffs. “This has been on the horizon and now it’s here.”

The class action clearly states that the farmers don’t see this as an “anti-GMO” lawsuit – instead, they say, it’s about a bio-tech industry that has repeatedly “failed to handle the risks associated with the GMOs in responsible ways” according to the documents filed in the United States District Court for the Eastern District of Missouri Eastern Division.

Two types of genetically modified seeds had been developed, Xtend Soybeans and XtendFlex Cotton by Monsanto. When used in combination with dicamba the result would be weed free fields with increased yields. According to the documents Monsanto promoted the seeds as “blockbusters”.

However, the herbicide meant to accompany the use of those seeds was known to “drift”. Farmers and industry analysts warned that using dicamba in that form could kill neighboring crops that either had no genetically engineered resistance or no natural resistance to the chemical.

“We allege there is a defect in the product. What happens is there a temperature inversion. The temperature gets colder on the ground than it is in the air above. That allows a vapor to form a cloud, rise up and then when the temperature slips again the vapor drops down miles away,” says Lesko. “The leaves crinkle and shrivel.”

Monsanto, BASF and Dupont had developed a new version of dicamba to deal with the drift problem but it had not received approval from the Environmental Protection Agency (EPA) and was not ready for sale. According the statements in the lawsuit dicamba, in its original form, could not be legally used in 2015.

Monsanto went ahead and released XtendFlex Cotton and Xtend Soybeans to farmers in 2015 on a limited basis.

The urge to increase yield among many farmers with Xtend cotton and soybean seed was too much.

“There have been complaints of damage to crops in Arkansas, Missouri, Illinois, Minnesota and pretty much anywhere were soybeans are planted the damage is showing up,” says Lesko. “It is taking longer to show up the more north you go because their growing season is a little bit behind.

“One of our clients had a peanut crop that was affected,” says Lesko. “They took the peanuts to a lab and confirmed residue of dicamba.”

More MONSANTO ROUNDUP News
Monsanto’s website says it is investigating and takes such issues very seriously. It warns that it is important not to rush to judgment. The website goes on to say, “By way of context, it is also important to understand that the kind of symptomology we are seeing can have many possible causes. Although jumping to conclusions may provide some kind of short-run satisfaction, the only scientifically sound way to solve any problem is to consider all of the possible causes, and then run them down—as efficiently and systematically as possible.”

Monsanto, Dupont and BASF have yet to respond to the class action.

“We are in the early stages of this. We are talking to farmers, but we are also talking to landowners too. Their trees are hurt, their rose bushes are hurt. Depending on how many people are involved will dictate where the case goes from there,” says Lesko.

Posted by
allan stanton
on August 8, 2017
“We allege there is a defect in the product. What happens is there a temperature inversion. The temperature gets colder on the ground than it is in the air above. That allows a vapor to form a cloud, rise up and then when the temperature slips again the vapor drops down miles away,” says Lesko. “The leaves crinkle and shrivel.”
Talk about creating a "heat dome for croplands, like we have for cities" we now HAVE damaged mother earth

Click to learn more about LawyersandSettlements.com
LawyersandSettlements.com - A trusted, independent legal news provider bringing quality news and information on legal cases and lawsuits filed in the United States of America to its readers since 2002. Over 650,000 legal help requests including Defective Product Cases, Consumer Banking Issues, and Environment Cases have been forwarded to lawyers all across to the country.