Implanon Birth Control Side Effects are Nothing New

Those new to allegations of Implanon birth control consumer fraud , various Implanon side effects and device migration might be surprised to know this isn’t anything new. In the UK, where Implanon was approved 7 years ahead of the US in 1999, there appears to be a litany of complaints about a product that was supposed to be quite literally, foolproof. 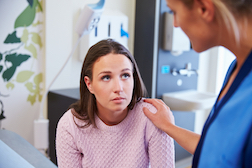 It has turned out to be, for many women, nothing of the sort.

While Implanon was approved by the US Food and Drug Administration (FDA) ten years ago in 2006, the implantable birth control device has been on the market in the UK since the dying days of the previous millennium. Promoted as safe and effective (and virtually worry-free), with a rating of 99.95 percent effective v. 99.70 percent effective for oral contraceptives (The Pill), women in the UK quickly embraced the matchstick-sized flexible rod that’s implanted into an upper arm and does its thing for up to three years.

However, many women are regretting that decision.

Mail Online (09/05/12), the online portal for the venerable Daily Mail, reported even then that lawsuits were percolating with regard to Implanon birth control side effects - and specifically, device migration away from the insertion point. Mail Online reports that ‘hundreds’ of women in the UK report that the Implanon device has become ‘lost’ in their bodies. This is a serious issue, in that the Implanon implantable birth control device, manufactured by Merck & Co., is designed to be retrieved.

For scores of women, this has not been possible. What makes things even worse are situations in which women, having previously chosen contraception with Implanon, have made the decision to try for a child and seek to have the Implanon device removed. A device that can’t be located places any attempt to conceive in jeopardy. While the Implanon device has a useful lifespan of three years, there have been reports suggesting the contraceptive qualities of the devices could last far longer - even into the fifth year.

Various reports cited by plaintiffs having filed an Implanon birth control personal injury lawsuit in the UK include difficulty, or the impossibility of successfully retrieving the device. Efforts to locate and remove the device from a patient’s arm have left many women with a bruised arm, and infected and swollen wounds for which plastic surgeons have sometimes intervened in order to avoid scarring.

There have also been problems with inserting the device, which is designed to be placed just under the skin. However, if the Implanon was placed too deeply into a women’s arm, not only does it increase the degree of difficulty in retrieving the device, but a device inserted too deeply may impede its capacity for contraception. Hundreds of women, according to Mail Online, have reported getting pregnant in spite of using Implanon.

There have also been reports, according to Mail Online, with the insertion procedure when the Implanon flexible rod, which is carried inside an insertion applicator, is not successfully inserted.

In a statement, Merck said in a statement published in Mail Online: “On the rare occasion that an implant cannot be located by the doctor or nurse feeling for the implant prior to an attempted removal and an ENG (hormone) test is positive, indicating that an implant has previously been inserted, there are various methods which can be used to help locate the implant.

“These include ultra-sound and MRI scanning.

“[Merck] would always advise women with any concerns to contact their healthcare professional or call the implant helpline number on the user card given to women when they have the implant inserted.”

More DEFECTIVE PRODUCTS News
Mail Online reported that as of 2012 no fewer than 584 women had reported Implanon birth control side effects to the Medicines and Healthcare Regulatory Agency - and specifically, unwanted pregnancies. There were 1,607 complaints overall. Included in the basket of complaints were concerns from doctors with regard to the inability to locate the device with a simple X-ray.

Partially in response to such complaints, Merck updated the Implanon device with Nexplanon, complete with an updated pre-loaded applicator and an implantable device containing barium, allowing for it to be seen by an X-ray or CT scan.

However, serving as fuel for ongoing Implanon birth control consumer fraud angst, Merck is reported to have failed to issue a recall for Implanon, resulting in continued sales of existing stock of the troubled device even as an improved product was being rolled out.

If you or a loved one have suffered losses in this case, please click the link below and your complaint will be sent to a drugs & medical lawyer who may evaluate your DEFECTIVE PRODUCTS claim at no cost or obligation.
Request Legal Help Now

Posted by
Patrice Wilson
on January 17, 2018
Hair loss within a few months weakness in my arm hard for me to work migraine headaches everyday
Shortage in my arms all day cramps
Posted by
maryann wooden
on February 2, 2017
Merck acted with gross negligence when it marketed this birth control IMPLANON. Clinical tests have proven that the type of synthetic hormone used in this BC are too dangerous for women. In fact the dosages are higher in IMPLANON then what was tested in the clinical test. The high dosage should have sent up red flags to the FDA, but it did not. The FDA, if they weren't in the back pockets, should have re-classified it as a 510K drug. This would have required the device be tested before approval. As it is it was submitted and approved under the wrong classification. The Combination Drug classification the one IMPLANON was approved under, does not require devices to be tested for approval. If it had been re-classified and the device tested they would have found the device defective (undetectable by an x-ray). This in turn would have saved women from all kinds of serious issues, and even death.
My congressman has agreed to help us, (Dr Diana Zuckerman Ph.D who is the President of The National Center for Heath Research in Washington DC) request through the FOIA from the FDA for all data submitted for approval of this BC. We will prove Merck acted with extreme gross negligence in marketing a product whose device can not be found to be removed. This BC played a critical part in my daughters death because she could not find a doctor to remove it and it's poison kept being dispensed into her body.