MRI risks Not Only for those with Kidney Failure

A common ingredient in the drugs used in magnetic resonance imaging (MRI), gadolinium, has recently been declared risky for patients with kidney failure. But interestingly, anyone undergoing an MRI is at some risk because of the intensity of the magnetic force within the scanner. 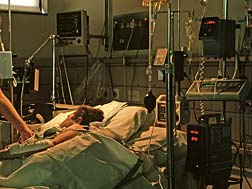 Patients with kidney failure are now known to be at risk to develop NSF (Nephrogenic Systemic Fibrosis) if gadolinium is injected into their bodies prior to an MRI. It can take some time for the illness to appear. NSF initially shows up in high blood pressure, muscle weakness and thickened, rough skin. As the illness develops, it causes pain, burning and itching in the affected areas. It can progress from stiffness in the joints to the point where the patient is unable to move, and it can lead to death. So far there is no cure for NSF.

The contrast agent drug, normally containing gadolinium, is injected into the blood stream of the patient prior to the scan taking place. This drug allows the MRI computer to isolate and distinguish between normal and abnormal tissue.

In May, 2007, the Food and Drug Administration ordered a Black Box warning (the highest level of warning) on each of the five gadolinium-based contrast agents approved for use in the U.S.—the warning saying that patients with kidney failure or impairment should avoid these agents.

But now for the risk that an MRI scan poses to everyone...

Metallic objects in the body, such as pacemakers, surgical wire and aneurism clips, can be dislodged or caused to malfunction. Metal outside the body can also heat during an MRI scan, and cause severe burns to the surrounding area. It's been reported that jewelry, electrode leads and foil-backed drug patches have caused serious burns to patients. Even metal fragments in tattoo ink, permanent eyeliner or cosmetics can cause burns.

More News
In 2001, a 6-year-old boy undergoing an MRI died after the magnetic force field suddenly sucked a steel oxygen tank out of the hands of a doctor in the room. The tank, about the size of a fire extinguisher, was whipped into the patient chamber it at a velocity of 20 to 30 feet per second. The boy suffered a skull fracture and brain hemorrhage, and died two days later.

The lesson here is that anyone undergoing an MRI must be acutely aware of any metal whatsoever in or about his person before entering the scanner.

But you don't need to have encountered a flying object to have a dangerous outcome from an MRI. Patients with kidney failure, who have had an MRI, whether or not they have developed NSF, ought to consult a lawyer. It is possible that they underwent the MRI after the drug manufacturer should have sounded the alarm.
READ ABOUT THIS LAWSUIT