MRI Patient Fears he Has NSF/NFD

It is a horrible affliction: early warning signs are drying and cracking of skin in the joint areas followed by thickening of fingers, knuckles, elbows and knees. Eventually the exterior skin dries up and actually entombs the victim until they die in a terrible, painful husk of their skin. No, it isn't a horror movie. These are symptoms of patients afflicted with NSF & NFD—a serious health risk linked to MRI contrast agents. 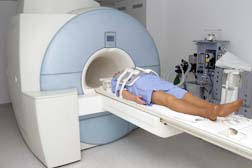 Research has found that an injection of gadolinium-based contrast dye used during an MRI (a non-invasive diagnostic procedure that enables physicians to visualize internal organs through magnetic interactions)sometimes doesn't leave the patient's body fast enough and can potentially cause NSF, Nephrogenic Systemic Fibrosis, or NFD, also known as Nephrogenic fibrosing dermopathy. As well, recent reports have linked a risk of NSF/NFD for patients with kidney failure who are administered the contrast agents during an MRI.

Tony talked with LawyersandSettlements from the emergency room at Beth Israel Medical Center in Boston.

"I've been sitting in the ER waiting room for more than an hour now because my blood pressure skyrocketed," he says. "Something happened within the last few days—my foot is throbbing like it isn't getting enough blood pumped to it. My blood is usually 120/80 and lately it has been at 160 for no reason.

"But I'm really worried about the possibility of getting NSF. About 18 months ago, my doctor thought I had kidney stones so I had two MRIs and was injected with the contrast agent on both occasions. When they injected it I felt sick and knew it was different because I'd had this same procedure before. It wasn't the same taste in my mouth—you know how you get that taste, even though it was injected into my vein.

About a year later I started to get muscle aches and pains, and my joints really hurt. And now, my skin has increasingly become tight and leathery; luckily I haven't needed an injection or IV since the last MRI because I don't think anything could puncture my skin, it feels so thick.

I had no idea what was causing this, until I talked to my friend about these symptoms. He told me to look up the health risks associated with MRI contrast agents. Was I shocked! I have all the symptoms, including yellow eyes.

Apart from this, I am in excellent health. I'm only 46 and work in construction, so I get lots of exercise. In my research on NSF, I found out that usually the hypertension occurs before you get the reddish outbreaks on your skin—hardening of the arteries is a result of hypertension so I am worried. I shouldn't be feeling like this.

This hospital has my MRI images which they took on two separate occasions and my medical records state that I was injected with this dye. And I'm back here again, sitting in the waiting room, waiting for the doctor. I've been here for about an hour and I feel horrible.

More News
I talked to my doctor about this contrast agent and my symptoms but he said not to worry about it, its nothing. But he is affiliated with this hospital... I feel like I'm up against a brick wall with my doctors. I just hope that I don't get the skin lesions that would complete the list of symptoms for NSF. I want to get tested for this disease; although my doctor brushed it off, I am going to ask the next doctor I see. I'd like to go to another hospital or see a specialist, but I'm not sure if my insurance will let me go anywhere else. They will probably just refer me back to my primary care physician…

I am very frustrated and uptight. I don't know what my future holds because I have a wife and three kids to support. I've missed a lot of work because of this, including today."

By the end of 2006, the FDA reported more than 200 cases of patients who had contracted NSF/NFD following exposure to gadolinium- based contrast agents. NSF has mainly been linked to patients with severe kidney failure but this is a fairly recent, man-made disease and there are many questions left unanswered: since 2006, it is estimated that many more people may have this disease, many of whom, like Tony, have yet to be diagnosed and are left frustrated and worried.