MRI Health Risks Have Little To Do With Magnetic Personality

As important as the MRI is in detecting disease and abnormalities deep within the human body, the process carries certain risks that have only recently come to light. Risks from imaging agents such as gadolinium, and recent concern over the long-term impact of the magnetic fields associated with Magnetic Resonance Imaging, can pose serious health risks for some patients, sometimes resulting in death.

An imaging agent is a dye that is injected into the patient, in an effort to provide the best image possible for the doctor, or technician conducting the procedure. While gadolinium has been found to be toxic if it remains in the human body for an appreciable amount of time after an MRI scan, for most people the risk is mitigated as the dye is expelled by the kidneys. 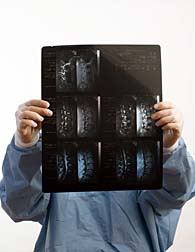 However, for people with kidney problems, getting rid of that gadolinium is easier said than done, and the fallout is Nephrongenic Systemic Fibrosis (NSF) and a related condition, Nephrogenic Fibrosing Dermopathy (NFD). Those who have experienced the painful symptoms of NSF/NFD have likened it to a living hell. Skin begins to darken in color, takes on a shiny tone, and hardens and tightens in a fashion that brings on extreme pain. Joints become painful and results in restricted movement, and damage to the heart and lungs can result. Eyes take on a yellowed, jaundiced look.

While NSF and NFD is not necessarily restricted to patients prone to renal failure or kidney problems, such patients have a much higher risk of developing the so-called man-made affliction given their limited, or complete inability to eliminate the gadolinium from their system. The US Food and Drug Administration (FDA) has been warning against the dangers of gadolinium-based contrasting agents, and is stressing the need to adequately screen patients for kidney function before MRI scans with imaging agents are conducted.

However, there is another concern with regard to MRI, and the concern lies in the very name: magnetic resonance imaging. The concern centers on the magnetic fields inherent with MRI, a process that has been around some 30 years now. Still, there is little data on the impact of long-term exposure to such robust magnetic fields, according to Sir William Stewart, Chairman of the Health Protection Agency (HPA) in Great Britain.

"The exposures to patients and medical staff from the magnetic fields can be high and there is a shortage of information on possible adverse long term health effects," he says.

A recent recommendation by an independent board of experts suggests that there is a pressing need to investigate whether regular exposure to the robust magnetic fields produced by MRI scanners could raise the risk of cancer and other diseases.

It should be noted that as technology advances and the need for clearer images of soft tissue heightens, so too is the intensity of magnetic fields. "MRI scanning has some undoubted benefits in medicine, especially as an aid to accurate clinical diagnosis," Sir William says. "However we need to bear in mind that the magnetic fields produced by the machines are quite substantial and that these fields are increasing in order to achieve improved clarity of image.

The exposures to patients and medical staff from the magnetic fields can be high and there is a shortage of information on possible adverse long term health effects."

As most already know, MRI has provided an important tool for doctors to probe soft tissue for abnormalities, the early detection of which could save, or at the very least prolong life. However, MRI requires the use of large magnetic fields, levels that are much larger than those commonly used in industry.

It has been reported that the European Parliament (EP) was scheduled to vote on new statutes designed to limit exposure to powerful magnetic fields earlier this year. However, the EP was forced to abandon the vote after doctors confirmed that the proposed limits were too restrictive, and would spell the end of MRI scanning.

Until this all gets sorted out, it would be wise to only consent to an MRI if it is absolutely necessary, bearing in mind various risk factors stemming from gadolinium-based imagining agents, and recent concern regarding magnetic fields.

It's been a year since the FDA asked various manufacturers of gadolinium-based contrasting agents to include black-box warnings for risk of NSF/NFD for patients with renal failure and poor kidney function. It has been reported that while NSF/NFD is a fairly rare condition, the prevalence of NSF/NFD in high-risk patients with kidney dysfunction is about four out of every 100.

More News
Like any medical procedure, there is always risk. And certainly, the benefits must be weighed against those risks. If a patient is suspected of having a life-sapping tumor, an MRI can locate that tumor and aid the medical team in their diagnosis, and treatment.

However, be aware of the 'magnetic' in magnetic resonance imaging, together with the fact that gadolinium-based contrasting agents, while aiding the technician in seeing a clear image, can turn sinister if it remains in your system. Patients with renal issues and kidney dysfunction should be carefully screened in order to prevent painful, and debilitating NSF/NFD.

If you are a kidney patient with NSF or NFD acquired from the gadolinium-based imaging agent associated with an MRI, you may not have been properly screened. Someone may have dropped the ball, and someone should answer for that…