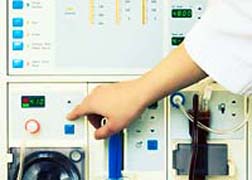 The new product, called Gadavist (known generically as gadobutrol) is made by Bayer Pharmaceuticals and is a gadolinium-based contrast agent. It is designed to help doctors detect lesions that affect barriers between the patient's brain and blood stream.

Gadolinium-based contrast agents have been linked to a serious condition known as nephrogenic systemic fibrosis (NSF) in patients who have kidney problems. NSF is a potentially life-threatening condition that can result in hardening and/or thickening of the skin around the patient's joints and, in some cases, around the internal organs.

The issue is that gadolinium is excreted through the kidneys and people with impaired kidney function are believed to process the gadolinium more slowly, allowing it to remain in the patient's system for too long and causing potential health problems.

There is currently no known cure for NSF and no consistently effective treatment. Nephrogenic systemic fibrosis is a progressive disease in which patients experience increasing difficulty with mobility, eventually requiring a wheelchair.

More MRI HEALTH RISK News
In 2007, the FDA requested a black box warning for existing MRI contrast agents that contained gadolinium, alerting patients to the risk of developing NSF. In addition to kidney insufficiency, patients who were just before or after liver transplantation, or those with chronic liver disease were warned about the risk of NSF if they had any kidney insufficiency, no matter how minor. The FDA alert notes that patients were reported to develop NSF after a single dose or after multiple administrations of a gadolinium-based contrast agent.

The FDA has said that it believes Gadavist has a lower risk compared with other gadolinium-based contrast agents (CBGAs). According to the FDA news release, "[Gadavist] is not one of the GBCAs that is contraindicated in patients with acute kidney injury or chronic, severe kidney disease."