Risks involving MRI kidney and the impact MRI contrast agents have on patients suffering from kidney disease have been a concern over the last few years. Contrast agents containing gadolinium, which helps technicians produce a clearer picture, can cause harm if not expelled from the body efficiently following an MRI procedure. That's the kidney's role. When a patient suffering from kidney disease or kidney failure is given an MRI contrast agent, MRI dialysis is required to prevent the onset of horrific adverse reactions. 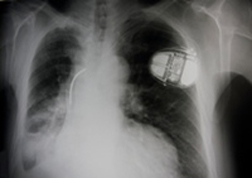 Patients with properly functioning kidneys don't have to worry about MRI health risks. Or do they? Patients with pacemakers and defibrillators, before now, have had to strike a cautionary pose.

To that end Health Canada has, in recent years, been sounding the clarion call about risks associated with old-style pacemakers and MRI.

''You could do MRIs, but it's definitely risky and, as a matter of fact, Health Canada has a strict recommendation that MRI imaging should not be performed,'' said Dr. Anne Gillis, a professor of medicine at the University of Calgary, in comments published March 1 by the Canadian Press.

''It may stop pacing or sometimes it may make the pacemakers pace really fast and precipitate potentially a life- threatening heart-related disorder,'' she said. ''The lead inside the heart can function as an antenna and conduct a radio frequency wave that can actually heat tissue and damage tissue inside the heart.''

For someone like Melanie Cruise, the inability to have a needed MRI poses an issue for her—and it has nothing to do with MRI contrast side effects. At 37, Melanie's kidneys are fine. However, she was born with a heart murmur that doctors determined could be managed most effectively with the insertion of a pacemaker.

More MRI HEALTH RISK News
The ultimate irony is that an MRI helped determine a proper diagnosis and treatment. In effect, the MRI led to the pacemaker for the young woman. However, the standard pacemaker makes any future MRI procedure risky.

However, Cruise has moved on by taking part in the clinical trial studying a new generation of pacemaker by Medtronic that is MRI compatible. Health Canada is reported to have studied the clinical trial results, and the Canadian health regulator has approved the device.

Should Cruise ever develop a kidney issue after the fact, leaving her open to MRI contrast side effects, then the MRI health risk resurfaces in a different form, after which the relationship between gadolinium and dialysis becomes paramount. For now, however, the use of the next-generation pacemaker should allow Cruise to undergo MRI as needed, without concern. MRI, doctor? Sure! In a heartbeat…
READ ABOUT MRI HEALTH RISK LAWSUITS

Posted by
Laura A Clark
on November 19, 2017
I had a contrast MRI with gadolinium yesterday for a brain scan around noon. By 5 pm, I was unable to walk, my balance was terribly off, extreme nausea, and severe vertigo- type dizziness. I could not see, was grabbing my head and crying, all at the same time. This lasted 4 hours! Someone had to grab me from falling and lay me down on their sofa. Today, the following day. I’m just trying to rest and stay still, for fear this miserable and horrible event may continue or return.
Posted by
Susan
on May 12, 2017
After two MRIs in a row (because they forgot to do something) my midsection is puffy. My back hurt and upper stomach feels tender. Not sure what is swollen in that area but it is very uncomfortable. It happened right after first MRI that was done with contrast. And, again after 2nd MRI two days later. I think the swelling is causing back to hurt from what ever is swelling to push against it.
Anyone have something like that?? I just about can't stand it. Kidneys? Liver? Stomach? Not sure what's swelling or messed up.
Posted by
carmel jordan
on November 28, 2016
About two weeks ago I had an MRI at CAMC in Charleston,WV.
Now I can hardly walk,bend my knees,or stand.
The pain in my knees and elbow is excruciating.
I am seeking an appointment with my personal physician today.

the pain in my knees is excruciating


Posted by
Dusty Roth
on July 24, 2015
I had multiple MRIs with Gadolinium based contrast media in a relatively short period of time. (18 MRIs in 6 years for a pituitary macroadenoma, then reduced to once a year for the next four years.) My eGFR slowly went from normal to 47 over that period of time. My symptoms were joint and foot pain for months following an MRI with GBCA.

The doctors refused to listen that gadolinium was the culprit. I finally got tested for heavy metal toxicity via a hair sample, which tested very high for gadolinium. I used a natural heavy-metal detoxifier and my eGFR went back to normal.

Perhaps a study on the effects of frequent use of GBCAs on the kidneys should be undertaken. I no longer use GBCAs when I have MRIs. Gadolinium doesn't clear my "normal" kidneys. At least not in the that were used on me.

Posted by
Lisa Berry
on February 15, 2015
I had a very bad reaction to MRI contrast in the last 10 years....I am wondering how to find out now if my muscle pain and stiffness is a result of that. I also have very bad rib pain...which is a mystery to any doctor I mention it to. I am only 40 years old.
Thanks