MRI Safer Than CT, but MRI Health Risks Remain for Some

When the US Food and Drug Administration (FDA) gives you a recommendation, you take the ball and run with it. That's in effect what Bracco Imaging SpA has done, given the issues surrounding MRI contrast side effects and the potential health issues for those suffering from kidney disease or other kidney dysfunction. 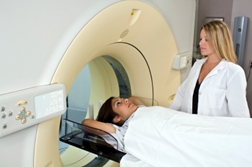 Bracco manufactures ProHance and MultiHance, imaging agents used in association with magnetic resonance imaging (MRI). It is these contrast agents that afford the MRI technician a more detailed and definitive image. However, with gadolinium-based contrast agents (GBCA), there is a cost to patients with kidney issues.

To wit, gadolinium is a chemical not normally found in the human body and presents dire consequences if not expelled in a timely fashion. In patients with normally functioning kidneys, this is usually not an issue. However, those with MRI kidney issues are incapable of expelling the contrast agent on their own without immediate dialysis intervention following the MRI procedure.

The result of poor or untimely eradication of gadolinium from the system is often nephrogenic systemic fibrosis (NSF), a rare and potentially life-threatening syndrome characterized by the hardening and encrustation of skin around joints. NSF patients have likened the condition to being entombed in your own body.

In response, the FDA in recent years has published new guidelines defining specific classes of GBCAs based on risk of causing NSF. In a briefing document dated December 8, 2009, the FDA, in addressing the risk for NSF, wrote: "Of the 5 GBCAs considered, the higher risk is associated with Omniscan, Magnevist, and OptiMARK while the lowest risk is associated with ProHance and MultiHance." [source: Journal of Technology & Science, December 19, 2010]

In an unrelated issue, the increased prevalence in all types of imaging is raising concerns as to the health risks. MRI health risks are confined to GBCAs and any potential issues from the intense magnetic fields reacting to metallic objects. However, many lump MRI in the same category as the X-ray and the CT scan, which is an incorrect assumption. X-ray and CT scan utilize radiation for scanning, with the CT scan involving much higher radiation levels than the X-ray.

More MRI HEALTH RISK News
As a comparison, according to the December 8 issue of the Fort Lauderdale Sun-Sentinel, a chest X-ray delivers 0.1 mSv, while a chest CT delivers 7 mSv—70 times as much and not counting the common follow-up CT scans.

In a 2009 study from Brigham and Women's Hospital at Boston, Massachusetts, researchers estimated the potential risk of cancer from CT scans in 31,462 patients over 22 years. For the group as a whole, the increase in risk was slight—0.7 percent above the overall lifetime risk of cancer in the US, which is pegged at 42 percent. But for patients who had multiple CT scans, the increase in risk was higher, ranging from 2.7 percent to 12 percent. (In this group, 33 percent had received more than five CT scans; 5 percent, more than 22 scans; and 1 percent, more than 38.)

MRI health risks, on the other hand, pose no such radiation threat. That said, MRI contrast side effects for those suffering from weak or malfunctioning kidneys, remain an ongoing concern.

Posted by
DLight
on June 27, 2014
In 2012 I had a major problem w/ my left kidney that was unknown to me at the time - it literally came apart, was removed and had a huge stage 4 Clear Cell Carcinoma inside that had metastisized. It moved immediately into my lungs and I have been watching what I am sure is the same cancer in 4 "masses" in both lungs and I won't let anyone tough my lungs!!! Good for Vilma's Dr to have the courage to tell her correctly to just let it go. Change your diet and lifestyle and see if the mass won't go away on it's own - many have and that is what is happening in my lungs. Your body has an amazing ability on it's own to heal itself given the proper diet and lifestyle. I eat fruits and vegetables, get mild exercise and eat NO bread, glutton, meat, dairy, refined sugar, etc... Best regards.
Posted by
stephi
on January 14, 2014
Yes. Please find a new doctor. I had a tumor in my neck that was "benign" only to find out later if I had not had it removed it had the potential to turn malignant. :-O I was shocked. I tell everyone if you have a tumor.... I don't care what stage it is... REMOVE IT! Don't "watch" it... don't wait and see what happens. Get it out ASAP.
Posted by
Vilma Lehman
on January 1, 2011
I was diagnosed with a tumor on my kidney in approximatelly 2007, after several MRIs and several CAT scans over the past few years. The tumor was not prevalent until I was subjected to MRIs and CAT scans. At the present time, my tumor on my kidney as of 2 years ago, is benign, and I was advised by my Doctor that I need no further CAT scans for a benign tumor on my kidney. Is it possible the tumor on my kidney could result in a malignant status tumor? When my Doctor told me there is no need to follow up, I thought that was bizzare. Please inform.