2011 may turn out to be a bellwether year for anyone suffering from the effects of MRI contrast side effects, with the announcement that the first bellwether trial regarding the alleged link between gadolinium and nephrogenic systemic fibrosis (NSF) is scheduled for January. 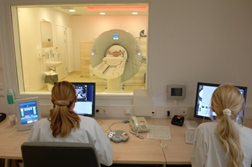 Plaintiffs in the first trial are Loralei and Donald Knase. They filed suit against GE Healthcare, claiming that a serious case of NSF was triggered by the MRI contrasting agent Omniscan.

MRI and kidney failure is linked in such a way, it should be noted, that while MRI does not cause kidney failure, the use of an MRI contrast agent can have dire consequences for anyone with kidney disease, due to the inability of someone with weak or malfunctioning kidneys to clear out the contrast agent.

Kidney patients who require MRI with a contrast agent such as gadolinium are recommended to have MRI dialysis (in other words, dialysis immediately following the MRI) in an effort to expedite the eradication of gadolinium from the bloodstream.

Plaintiffs involved in hundreds of lawsuits allege that gadolinium caused them to develop NSF, which causes hardening of the skin and tissue growth along joints, eyes and internal organs.

There is no treatment or cure for NSF, and the disease can be fatal.

More MRI HEALTH RISK News
Lawsuits were consolidated in late 2008 in US District Court, Northern District of Ohio, after almost 400 cases were filed across the country. Trials were originally set for May of this year, but a number of the suits against Bayer, one of the defendants, settled.

On a related note, MRI health risks also exist for individuals with pacemakers. Due to the intense magnetic fields associated with MRI, patients cannot wear or be near anything metallic. That goes for an implanted pacemaker.

Earlier this year, Medtronic received European approval for its Ensura MRI SureScan pacing system. Medtronic announced in June that European patients with the new device would have access to full MRI scans without positioning restrictions in the MRI scanner.

The system is, so far, not approved in the US—thus continued MRI health risks for individuals with traditional pacemakers remain.
READ ABOUT MRI HEALTH RISK LAWSUITS

Posted by
Inez Watson
on December 2, 2010
I had a mri with contrast this year and large purple knots came up on my thigh. I went to several doctors and not a one could tell me what was wrong.Finally I went to a dermatologist who got a sample and sent it to Emory hospital in Atlanta.I was put in the hospital. I was given an iv and the person put Reglan in it and I was in a coma state for about seven weeks.The doctor came in after two nights and said that I looked too good to be in the hospital and sent me home.My husband put me back in the hospital.I went into a coma and was put in the hospital for seven weeks.The doctors called my husband and told him that I had cancer.I was in stage four by this time and didn't know what was going on. I was throwing up a lot and lost fourty pounds.My cancer doctor said that I was a miracle.