New MRI Contrast Agent Could Work For CT Scans, Too 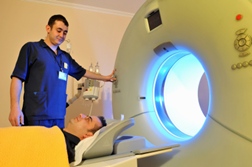 Previously, cancer patients who underwent either an MRI or a CT scan needed to wait 24 hours for the contrast agent of their initial scan to clear before they could undergo a different type of scan, according to PhysOrg.com. The researchers are saying that this is the first such contrast agent that can be used for both types of scans, thereby eliminating the need for the 24-hour waiting period.

The new contrast agent for both of the scans is made of a water soluble alloy of iron and platinum nanoparticles.

This MRI contrast agent that can also be used for CT scans was developed by a team led by Professor Chen Chia-chun of Academia Sinica and the Chemistry Department of the National Taiwan Normal University in Taipei and Professor Shieh Dar-bin, a doctor and lecturer at the National Cheng Kung University Institute of Oral Medicine and the Department of Stomatology in Tainan.

The results of the research were published in a recent issue of the Journal of the American Chemical Society.
READ ABOUT MRI HEALTH RISK LAWSUITS