There are three common types of gadolinium-based contrast agents that radiologists should avoid using with patients with kidney disease to avoid MRI health risks. 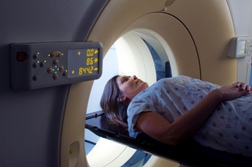 An advisory from the American College of Radiology warns that gadodiamide, gadopentetate dimeglumine and gadoversetamide can cause nephrogenic systemic fibrosis (NSF) among patients with acute renal failure or severe chronic kindey disease.

While the problem is relatively rare, it is not yet curable, says Dr Richard Cohan, professor of abdominal radiology at the University of Michigan. The doctor told HealthLeaders Media that about 90 percent of those with kidney disease will not develop NSF if they receive one of the contrast agents, but those who do often experience a hardening and stiffening of their skin, joints and muscles.
READ ABOUT MRI HEALTH RISK LAWSUITS