Among those at risk of MRI health problems are patients with kidney disease, for whom MRI contrast agents containing gadolinium can prove toxic. But it's not just kidney patients who should be careful. Anyone with screws holding bones in place, permanent staples affixed to organs, pacemakers and implanted defibrillators and any other form of metal implanted in the body are at risk of MRI health risks. The powerful magnetic force of the MRI machine can potentially impact such implants and damage the organs. 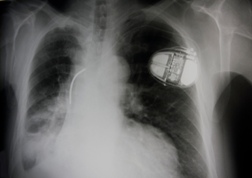 Earlier this month the Orlando Sentinel ran a story about a fit and fast 25-year-old runner who was diagnosed last year with a rare heart condition. Random pauses in Cristina McShane's heartbeat left her feeling faint or blacking out entirely. Unable to drive and finding the quality of her life rapidly diminishing, McShane went to see a doctor.

She was told she needed a pacemaker. However, the presence of the pacemaker would leave her out of luck down the road should she ever need an MRI. Fatal complications are rare, but most doctors will not allow a patient with a pacemaker to undergo an MRI.

It's an issue familiar to most doctors but not many patients or caregivers. A newly released survey of seniors by the National Council on Aging found that nearly a third of adults 65 or older and more than half of their caregivers reported being uninformed about the problem.

Given the increasing availability of MRI as a tool for diagnosing diseases, however, the subject is suddenly becoming an issue.

The MRI employs a powerful magnet that can superheat the metal, burning heart tissue where the leads of a pacemaker are attached. It can also disrupt the device's signal, causing the heart to go into a life-threatening arrhythmia.

Pins and metal screws anchored to bone are less of a problem, given they attach to soft tissue and are not likely to come loose in the body as a result of the magnetic forces of an MRI. That said, individuals with permanent or temporary orthopedic screws or pins should alert MRI techs to the fact before undergoing the procedure.

More MRI HEALTH RISK News
Dr. David Bello, director of cardiovascular imaging at Orlando Health, says that those with pacemakers and defibrillators are at the highest risk "because they attach to the heart and because a large number of people have those devices now. One of our patients has a brain tumor and he has a pacemaker, and we had to allow him to have an MRI with a crash cart standing by in case he went into cardiac arrest."

The Orlando Sentinel reports that Bello has researched the issue and developed an MRI-compatible pacemaker currently awaiting approval from federal regulators. Bello, who treated McShane, asked the FDA to allow him to give her one of the experimental pacemakers, due to her young age. But the FDA said no.

McShane ended up receiving a conventional pacemaker. "I was upset," McShane said. "I was only 24, and looking to the future and what I might need medically, I knew I might need an MRI. But I didn't have a lot of choice. I couldn't keep passing out."
READ ABOUT MRI HEALTH RISK LAWSUITS