Fearing that thousands of US residents have developed NSF from exposure to MRI health risks in the past decade, the US Drug Watchdog is embarking on a national investigation into gadolinium-based contrast agents (GBCAs), also known as contrast dyes. The group believes that both kidney patients and the medical community have not "connected the dots" between NSF—a life-threatening and incurable disease—and the use of the gadolinium dye used in MRIs. 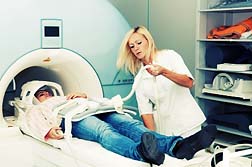 Given the alarming statistic that 26 million US citizens have kidney disease, an estimated thousands of people could have developed NSF.

Compared with European health officials, the FDA has been slow to act on GBCAs. It wasn't until this past November that the agency warned in a memo that GBCAs provided by Covidien, GE Healthcare, and Bayer are more hazardous than others. The memo also mentioned that the FDA would consider recommending blanket label warnings rather than pointing out specific brands.

A number of lawsuits have been filed against Bayer Health Care and other contrast dye manufacturers, and the first NSF trial is scheduled this month in the San Francisco Superior Court before Judge Curtis Karnow.

According to court records, 20 similar cases were consolidated in February 2008 and will be heard in the U.S. District Court for Northern Ohio in Cleveland. Since that time, more than 200 plaintiffs have had their cases added to the liability suit.

Many NSF lawsuits filed against Bayer have been settled, and most cases are pending against GE Healthcare and its Omniscan MRI contrast agent.

Meanwhile, GE is pursuing a libel action against Henrik Thomsen, director of the department of diagnostic sciences at the University of Copenhagen, over the "derogatory remarks" he made regarding Omniscan MRI drug at a medical conference in Oxford, England.

The contrast agent has also been associated with a medical malpractice lawsuit. On December 18, 2009, a Suffolk County jury found that two doctors at Children's Hospital Boston caused the death of a three-year-old Pennsylvania boy and voted to award his parents $15 million in damages. The boy had undergone several surgeries for a birth defect and suffered a seizure during a catheterization. A CAT scan showed that contrast dye had leaked into his brain.

Boston.com reports that at one point during the MRI, the boy's heart rate plummeted and doctors had to resuscitate him. The boy was transferred to the cardiac ICU and was given two more MRIs to gauge the extent of his brain damage. When he left the hospital, he was unable to walk or speak.
READ ABOUT MRI HEALTH RISK LAWSUITS