A few years ago, Henrik Thomsen, one of Europe's leading radiologists, warned his colleagues about nephrogenic systemic fibrosis (NSF), which he called a medical "nightmare." In 2006, it was discovered that NSF was linked to Omniscan, a contrast agent given in advance of MRI scans. Now, GE Healthcare, a subsidiary of General Electric and the manufacturer of Omniscan, is suing Thomsen for libel. 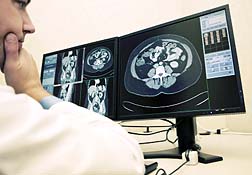 Thomsen revealed to his colleagues how 20 kidney patients treated at his hospital had subsequently contracted NSF, a rare and potentially fatal disease that causes the skin to swell, thicken and tighten. Some victims were confined to wheelchairs and at least one patient died. In early 2006, Thomsen was informed that every kidney patient at his hospital who was diagnosed with NSF had been given a contrast agent for a MRI scan (about 90 percent had been given Omniscan). He and his colleagues then alerted medical authorities and reviewed all known cases of NSF.

Although Thomsen couldn't prove that the gadolinium-based contrast agent caused NSF, he resolved to never again give the drug to another kidney patient. At that time, the Danish Medicines Agency linked Omniscan to 25 NSF cases in a May 2006 notice.

A number of Danish patients filed claims with a Danish government insurance agency, which pays benefits if it decides that a drug was a likely cause of inquiry or death. The insurance agency concluded that the side effects of Omniscan had "caused" a deadly embolism in one patient. To date, GE has declined to comment on this case.

Thanks to Thomsen and a small group of clinicians who alerted patients and regulators to the potential risks of Omniscan for renal patients, European medical regulators recommended last month that anybody who needs a MRI scan should be checked to ensure that their kidneys are healthy before taking Omniscan or two similar contrast agents.

It wasn't until 2007—five years after the contrast agents were approved—that NSF was first discovered in the US. That year, the Commission on Human Medicines in the UK advised doctors not to use the contrast agents Omniscan, Magnevist or Optimark in patients with severe renal problems.

GE did not deny an association between its product and NSF, but argued that singling out its drug as "particularly risky was unfair." The Food and Drug Administration (FDA) relented. It issued safety warnings to doctors but did not recommend that they stop using contrast agents in kidney patients, as Thomsen and many other clinicians advised.

According to the Sunday Times on December 20, GE Healthcare said that Thomsen's presentation to his colleagues was defamatory because it "accused the firm of suppressing information and marketing its product when it was aware of possible problems".

As a result of the libel suit, Thomsen can no longer speak about the risks of Omniscan, although he did condemn GE's "attempt to silence me." GE has so far spent more than £380,000 ($622,000 USD) on the case, and Thomsen will have to pay the firm's costs if he loses the suit. Campaign groups fear that vital scientific and medical work is being threatened because of the danger of libel actions.

This month, however, an FDA advisory panel stepped up to the plate and recommended that two contrast agents--Omniscan and Optimark--should not be given to patients with severe kidney disease. It also stated that Magnevist poses higher risks than other drugs.

The FDA's reaction represents a small victory for Thomsen, but will it be enough to win his case against GE?
READ ABOUT MRI HEALTH RISK LAWSUITS

Click to learn more about LawyersandSettlements.com
LawyersandSettlements.com - A trusted, independent legal news provider bringing quality news and information on legal cases and lawsuits filed in the United States of America to its readers since 2002. Over 650,000 legal help requests including Drugs & Medical Cases, and Whistleblower Cases have been forwarded to lawyers all across to the country.