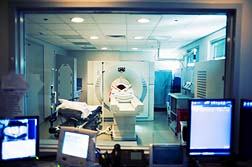 "My brother, Mark, had high blood pressure, diabetes and a kidney problem, but he had it under control with meds and a healthy diet," says Mike. "Back in 1999 he first had an MRI, and not long afterward his kidney problems got worse. By 2003 he started dialysis, right up until he died. His wife, Sarah, told me that the last MRI Mark had was in 2005 and he really went downhill after that.

"We want to know why Mark had all these MRIs when he was at high risk for NSF.

"Just before he died, Mark's legs were swollen and bluish-black and his skin was leathery. Sarah told me that during his last MRI, he had some kind of allergic reaction to the contrast agent; now we believe he had NSF but his death certificate says he died from a stroke.

"A lawyer contacted me recently, and last week I sent a fax requesting Mike's medical records to Cedars-Sinai Medical Center in Los Angeles—they told me it will take about 10 days. Then we will take the medical records to the lawyer to determine if we have a case against the maker of this contrast agent."

More MRI HEALTH RISK News
In 2007 the FDA requested all manufacturers of all gadolinium-based contrast agents (GBCAs) to add a new boxed warning and new labeling that includes the following information:

- Exposure to GBCAs increases the risk for NSF in patients with acute or chronic severe renal insufficiency.

- NSF is a debilitating and sometimes fatal disease affecting the skin, muscle, and internal organs.

- Avoid use of GBCAs unless the diagnostic information is essential and not available with non-contrast enhanced magnetic resonance imaging (MRI).

- Screen all patients for renal dysfunction by obtaining a history and/or laboratory tests.

- When administering a GBCA, do not exceed the dose recommended in product labeling. Allow sufficient time for elimination of the GBCA prior to any readministration.