A case report published July 12 in the New England Journal of Medicine tells the story of a 70-year-old man with kidney failure who developed the classic symptoms of having been exposed to gadolinium during one or more MRIs. Over the course of four years following a kidney transplant operation, he became seriously disabled by nephrogenic fibrosing dermopathy (also known as nephrogenic systemic fibrosis or NSF). 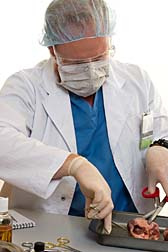 The NEJM report states that the patient had developed skin thickening on one arm, on his legs and on his lower abdomen. He had limited mobility in one elbow and significant skin hardening around the elbow. The overall skin thickening had progressed to the point that he had become increasingly immobile. Where four years earlier he had undergone a successful kidney transplant, he was now back on routine dialysis, and wheel-chair bound.

On May 7, 2007, the Food and Drug Administration ordered a Black Box warning (the highest level of warning) for the packaging for each of the five gadolinium-based MRI contrast agents approved for use in the U.S. The warning advises that patients with kidney failure or kidney impairment should avoid exposure to these agents, because they are at risk to develop NSF, a devastating skin disorder. NSF starts by causing high blood pressure, muscle weakness and thick, hardened skin. As the illness develops, it causes pain, burning and itching in the affected areas. It can progress from stiffness in the joints to the point where the patient is unable to move, and it can lead to death. At this time, there is no known cure for NSF.

More News
The American Kidney Fund says that about 470,000 people in the country are currently relying on dialysis or kidney transplants to keep them alive. It also reports that more than 70,000 patients are on the waiting list for a kidney transplant, but only 17,000 will get a new kidney this year.

Can anything be done for the kidney disease sufferers who underwent MRIs without knowing of the risks, and contracted NSF? It depends on how well they are served by the justice system.

The pain and suffering of these people is incalculable. They have been imprisoned in their own bodies by this disease. They are entitled to fair compensation, if it can be established that the manufacturers of the gadolinium products knew of the danger to patients with kidney disease and didn't promptly alert the FDA, the medical profession and, most importantly, kidney disease sufferers.
READ ABOUT THIS LAWSUIT