A magnetic resonance imaging MRI based on the drug gadolinium has been implicated in serious adverse reactions in patients with kidney failure.

The MRI drugs are called contrast agents. These contrast agents are chemicals injected into the blood stream before the MRI scan takes place. Because the nanoparticles in the agents make the blood vessels stand out during the scan, they allow the MRI computer to isolate and "see" tumors which don't show the same blood vessel patterns as those seen in healthy tissue. 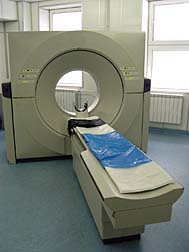 Nanoparticles are particles so small that they stand somewhere between atoms and molecules on one hand and physical matter on the other.

But a dangerous problem has been facing patients with kidney failure who need MRIs. It turns out that they are at risk to develop a serious illness after they have been injected with gadolinium. That serious illness is Nephrogenic Systemic Fibrosis (NSF). The initial symptoms include high blood pressure, muscle weakness and thickened, rough skin. As the illness develops, it causes pain, burning and itching in the affected areas. It can progress from stiffness in the joints to the point where the patient is unable to move, and it can lead to death. So far there is no cure for NSF.

In May, 2007, the Food and Drug Administration ordered a Black Box warning (the highest level of warning) on each of the five gadolinium based contrast agents approved for use in the U.S.—the warning saying that patients with kidney failure or impairment should avoid these agents.

Now, there may be something better on the horizon. Science Daily reported June 5 that scientists in Seoul have developed an MRI contrast agent using manganese oxide nanoparticles. The scientists say that the newly developed nanoparticles produced images of the anatomic structures of mouse brains that are as clear as those that could be obtained by looking at a sliver of brain tissue under a microscope—images superior to those produced by the current gadolinium based complexes.

More News
They say this is the first truly biocompatible MRI contrast agent for anatomical brain imaging, as well as for imaging of other body systems.

In this highly technical field, it is hard for the ordinary person to guess what lies ahead. Maybe this contrast agent will solve some of the problems now facing MRI patients with kidney failure. In the meantime they will have to use special precautions, and the warnings will have come too late for the unlucky ones.

NSF sufferers are now suing the marketers of the gadolinium based contrast agents, saying they failed to warn patients with kidney failure, or their physicians, when those marketers already knew there was a significant risk specifically facing them. And now they will have their day in court, to tell their side of the story.
READ ABOUT THIS LAWSUIT