Among the health risks associated with MRIs are burns that can result during the procedure. Such was the case with a 21-month-old boy from Alabama who was injured during an MRI scan at Children's Hospital. 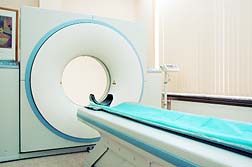 According to an article dated December 5 in the News-Courier of Athens, Alabama, Noah Crowe was in the hospital in late November to remove a fist-sized tumor from his brain. He sustained a third-degree burn below his right elbow while undergoing an emergency MRI at the hospital.

John David Crowe, the boy's father, told the News-Courier that a doctor at the hospital informed him that the toddler's injuries may have resulted from the aluminum-backed warming blanket, often called a "space blanket," with which he was covered during the MRI procedure. The doctor allegedly told the boy's father that the powerful magnetic field produced by the MRI likely "excited" the electrons in the aluminum, causing an electrical arc that served as the source of the burn.

The injury will require a skin graft.

Hospital covering the costs of all treatment associated with MRI burn

At one point the hospital administration offered a conflicting view as to the source of the boy's MRI injury—contact with trapped heat in a cotton blanket recently removed from a warmer.

More MRI HEALTH RISK News
Since that time, the hospital has informed the Crowe family that it intends to contact the Environmental Protection Agency (EPA) with regard to the dangers of the aluminum-backed warming blankets used in concert with MRI procedures. The hospital also communicated to the Crowe family that such space blankets have been banned from further MRI procedures.

The hospital has since offered to cover the cost of treating the toddler's arm wound, including travel costs and pharmaceutical costs.

"I was contacted by the hospital's attorney (also Patient Safety/Risk Management officer) Vickie Atkins (December 4) and she said all (uncovered) bills for treating Noah's burn will be held until the treatment is over," said John Crowe. "The hospital is paying for all medical treatment, all travel and all pharmaceuticals related to the treatment."

Initially the hospital provided verbal notification that it would cover the costs associated with treating the MRI burn, but did not put that commitment in writing until just recently.
READ ABOUT MRI HEALTH RISK LAWSUITS