Jennifer had a pacemaker implanted a few years ago and needed to have an MRI beforehand. She'd had MRIs before, and had no idea there were any MRI health risks. But this time was different. "As soon as the radiologist said, 'The contrast dye is coming through now,' my arm started to burn, and it became unbearable," said Jennifer (pictured below). 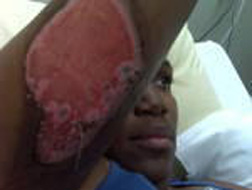 "I tried to withstand the pain but it became unbearable," Jennifer explained. "He told me to just hold on, we'll be done in a minute. I was crying with pain—another radiologist came in and told him to try the other arm. He put the contrast agent in my left arm and it still hurt but not nearly as bad as my right arm.

"One month later I had the pacemaker implanted and a few days later went on vacation in Florida. My girlfriend first noticed something wrong; she saw a cluster of little black dots on my right arm, but I didn't think much of it. The next day I woke up and my entire arm was burning. I phoned my heart doctor and he suggested it was a spider bite because it had nothing to do with the surgery. I knew it wasn't a bite.

"Four days later I came home and the burning was getting worse. My husband took a look and noticed that some of the black dots had turned into blisters. I was putting a cold compress on my arm to alleviate the burning but when I removed it, my skin was peeling off with the compress. At that point I went to ER.

"The doctors told me that it was something I had come in contact with and had an allergy—maybe something on the plane. They gave me antibiotics and sent me home, still in agony. I was in so much pain; even if the wind blew on it, if I bumped it even slightly, I would be in tears.

"I went back to my heart doctor and saw his nurse practitioner. She told me to go back to ER right away and have them admit me with an antibiotic IV. I had a hard time getting admitted but my daddy came with me and he put his foot down. They had no idea what to do with me—a plastic surgeon came by a few times a day, then he just stopped coming; next up, a dermatologist came by, told me to come to his office the next day and I was discharged from the hospital.

More MRI HEALTH RISK News
"The dermatologist concocted some cream and told me to spread it over my arm. It might as well have been snake oil! I was going crazy—if I had a sharp knife I would have cut my arm off; I was begging my husband, everyone, to cut it off. I couldn't sleep, even with sleeping pills. This went on for a year…

"Then I went to a pain management specialist. He said we aren't going to think about your arm; we are going to talk about your state of mind instead!

"My family doctor suggested I try yet another doctor, this time a plastic surgeon. It was the plastic surgeon that I saw a year ago in the hospital! He couldn't believe I had suffered this long. 'You need a skin graft and I'm scheduling you for surgery right away,' he said.

"The skin graft worked, thank god. I asked him how it could have happened and if it had anything to do with the contrast dye. He said it was very likely—what else could it have been? I can hardly believe that gadolinium is injected into people."
READ ABOUT MRI HEALTH RISK LAWSUITS