Patients with Nephrogenic Systemic Fibrosis May be Misdiagnosed

Patients who have had a gadolinium-based MRI contrast agent may have developed Nephrogenic Systemic Fibrosis (NSF) without realizing it. Some may be misdiagnosed with another condition, while others may not realize the full extent of the side effects. In this second part of a two-part series, John Dalimonte, partner at Karon & Dalimonte, discusses the potential for misdiagnosis, litigation against the makers of gadolinium-based dyes and how patients can specifically request a test for an NSF diagnosis. 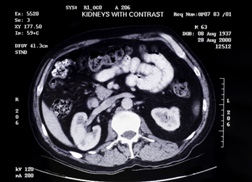 "No cases have gone to trial yet," Dalimonte says. "For the most part manufacturers other than GE Healthcare, the manufacturer of Omniscan, have settled. There are some pending cases, but the majority of cases are either in the process of resolution or are resolved. The only one really left is GE. It is involved in approximately 80 percent of the cases of NSF but only had 26 percent of the market."


"NSF is an unnecessary disease. There was no added value to the use of Omniscan. There were and are other, safer products out there"
One issue for patients with NSF is that the condition is often misdiagnosed as either scleroderma or sclerodeema because of the patient's skin and because the doctor may not understand the connection between NSF and gadolinium-based contrast agents.

"If you're misdiagnosed, you don't know that you have NSF," Dalimonte says. "The other thing is that the onset of NSF can occur from literally days after administration of the contrast media to upwards of a year and a half.

"Unfortunately, once a person has NSF, there is very little that can be done. Physical therapy may help slow down the progression of the disease, but currently there is no cure.

"If a patient has been diagnosed as having scleroderma and they have a known kidney issue or insufficiency and they have had some sort of MRI, they should look into it," Dalimonte says. "They may have had a gadolinium-based contrast agent and not know it.

"The best way to confirm the disease is to see a dermatologist and ask for a punch biopsy—a deep enough punch biopsy that goes to the subcutaneous tissue. Send the tissue to a lab that knows to look for the type of pathology associated with NSF.

"Patients may have tightness in the skin or an area of the skin that is thickened, so that is the area you would need the punch biopsy. If a person suspects that he has NSF, he or she should go to the dermatologist and request a punch biopsy.

More MRI HEALTH RISK News
"NSF is an unnecessary disease. There was no added value to the use of Omniscan. There were and are other, safer products out there."