The nation's first trial of a Nephrogenic Systemic Fibrosis (NSF) case was assigned today for trial before the Honorable Curtis E. A. Karnow of the San Francisco Superior Court. NSF is debilitating and incurable condition caused by exposure to gadolinium-based contrast agents (GBCAs), which contain a toxic heavy metal and are sometimes used by radiologists during magnetic resonance imaging (MRI) and magnetic resonance angiography (MRA) procedures. 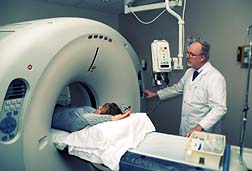 The plaintiff, Peter Gerber of San Rafael, CA, represented by Larry Gornick of Levin Simes Kaiser & Gornick LLP in San Francisco, contracted NSF as a result of his injection with Magnevist, a GBCA manufactured and sold by Bayer Healthcare Pharmaceuticals, Inc. and its corporate affiliates in Germany. NSF is a disease which causes hardening of the skin and connective tissues. As the disease progresses, sufferers may experience joint contractures and fibrosis of internal organs and blood vessels. Over time, the debilitating and disfiguring effects of the disease worsen and may cause death.

The suit claims that Bayer was negligent in designing, testing and marketing Magnevist, and promoted Magnevist as safer than other GBCAs and for off label uses in MRA procedures, in violation of the California's Consumers Legal Remedies Act. The suit also alleges that the defendants ignored the risks of using GBCAs on patients with impaired kidney function, failed to warn about such risks, were negligent in the design of these products and ignored the safety risks in administering repetitive doses and the increased doses commonly administered for MRAs.

"Magnevist was never approved by the FDA for use in MRA procedures. Also, despite their promotion of the drug for off label uses, Bayer never adequately tested Magnevist in such procedures, and failed to do any long-term tests in the population at risk for NSF, patients with severe kidney disease, such as Peter Gerber," said Gornick. "A recent FDA staff review found that Magnevist was among the GBCAs carrying the highest risk of NSF."

In 2007, the FDA ordered that Bayer and other manufacturers of GBCAs add a black box warning to the product labeling stating that patients with severe kidney insufficiency who receive GBCAs are at risk of contracting NSF. On December 8, 2009, a joint meeting of the FDA Cardiovascular and Renal Drugs and Drug Safety and Risk Management Advisory Committees will be held to discuss safety considerations related to GBCAs.

More MRI HEALTH RISKS News
"Peter Gerber and NSF patients across the country are suffering from the debilitating effects of this disease with no cure available," added Gornick. "Peter's physicians found that extracorporeal photopheresis (ECP) was effective in treating Peter's NSF, but those treatments are no longer covered by his insurance. A jury verdict is the only way that Peter will be able to afford this treatment, which will help minimize his pain and ultimately prolong his life."

Bayer reported in a recent Securities and Exchange Commission filing that it had been served in 317 lawsuits involving NSF and Magnevist as of June 30, 2009. NSF cases in California state courts are consolidated in San Francisco before the Honorable Richard A. Kramer. Most of the cases against Bayer have been filed in federal court and consolidated in the Northern District of Ohio before the Honorable Dan A. Polster. No other NSF case against Bayer has been set for trial anywhere in the country.
READ ABOUT MRI HEALTH RISKS LAWSUITS