"My mom had several MRIs in the late 1990s - they were trying to find out why she was having dizzy spells," says Willie G. Not long afterward, her skin turned yellow and her feet and hands tightened--the first signs of Nephrogenic Systemic Fibrosis (NSF) that can be caused by a Gadolinium based contrast dye injected into the vein during an MRI.

"My mother was a healthy woman, in her early 60s," says Willie. "She was working as a caregiver for old folks, always active." His mother's illness came right out of the blue with no warning signs; not only was she physically fit; there was no history of any kidney or liver disease on either side of her family. 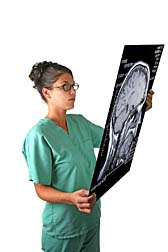 "About a year or so after she had these MRIs her health went downhill, " Willie says. "She first complained that her skin itched so much that it caused her terrible pain. Finally she wound up on dialysis and she was in and out of hospital over a five-year period. In 2005 we had to put her in a nursing home and that is where she passed away, in November of that year.

"I believe these MRIs triggered renal failure. It was too much of a coincidence—she wasn't taking any meds other than aspirin for the occasional headache.

I think this contrast dye should be taken off the market if it is causing folks to lose their lives. I wonder why the FDA hasn't done anything about removing it. It makes you wonder how safe we really are from drugs such as this [gadolinium].

One day I am going to be old and I would like to feel safe in what I am taking; I hope I never get into a situation like my mother did - you never know. I believe my mother would be alive today if she hadn't taken these tests. These MRIs didn't help - if anything, the stuff they injected into her vein made her worse."

One more account
A nephrologist diagnosed Lorne Swanson (not his real name) with chronic kidney disease in May, 2007. "I have no idea what caused my reduced kidney function except for MRIs with Omniscan I had in August, 2005," says Lorne.

More News
"I had three or four MRIs done because they were testing me for MS. I had optic neuritis," he says. "Then I had some blood tests and the nephrologist told me that I had problems with my kidneys. I ended up going to a rheumatologist and he sent me for more tests: this time I know that I have type 2 diabetes.

This comes as a shock to me because I'm only 59 years old, never had any kidney problems and there is no history of anything like that in my family.

Then I read something about the side effects caused by this contrast agent.
'Wow, wait a minute, gadolinium and kidney damage,' I said to myself. It is a possibility that there is a link but I didn't know for sure. I'm not an educated scholar but then I talked with my hematologist and he said it was likely that galdolinium could be involved."