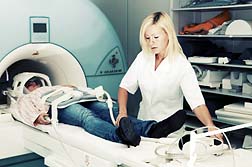 According to the complaint, Ms. Crabtree was administered Omniscan, also known as gadodiamide, which is an injectable paramagnetic contrast agent used for MRI and MRA, made by GE. It contains the metal gadolinium, which is a highly toxic substance in its free state. For three additional MRA procedures she was given the GBCA Optimark, which is manufactured by Mallinckrodt.

The lawsuit states that following the administration of the GBCAs she began experiencing symptoms of NSF, including hardened plaques of skin ("orange peel skin"), skin lesions, fibrosis and contractures in her hands, feet, arms, legs and associated joints. She was subsequently diagnosed with NSF.

Consequently, she has suffered serious, progressive, permanent and incurable injuries, together with significant pain, physical insufficiency, disfigurement and scarring.

Ms. Crabtree is suing the manufactures of the GBCAs she was administered, seeking actual and punitive damages, and costs incurred to date for her personal injuries and suffering.

Click to learn more about LawyersandSettlements.com
LawyersandSettlements.com - A trusted, independent legal news provider bringing quality news and information on all legal cases and lawsuits filed in United States of America to its readers since 2002. Over 250,000 legal help requests including Drugs & Medical Cases, Malpractice Cases, and Personal Injury Cases have been forwarded to lawyers all across to the country.