A lawsuit was filed today on behalf of a man who developed a rare disorder called nephrogenic systemic fibrosis (NSF) after he was injected with gadolinium-based contrast agents for magnetic resonance imaging (MRI) at St. Luke's Hospital in Chesterfield, MO. 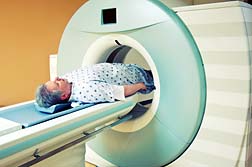 The man who filed the complaint suffers from renal disease and began dialysis in 2004. In January 2005, in preparation for an MRI at St. Luke's Hospital, he was administered a contrast dye. A year and a half later, on August 25, 2006, he underwent an MRI "with and without contrast" at St. Luke's. He underwent two more MRAs at St. Luke's--one in October 2007 and the other in November 2007--both of which required the use of a contrast agent.

More MRI GADOLINIUM News
In the aftermath of these imaging studies, he developed hard plaques and lesions on his skin, as well as fibrosis and contractures of the hands, feet, arms and legs. In early 2007, the plaintiff was given a diagnosis of nephrogenic systemic fibrosis (also known as nephrogenic fibrosing dermopathy), which is incurable, debilitating and usually fatal.

The lawsuit asserts a medical malpractice claim against St. Luke's Hospital, alleging that the hospital was negligent when it administered gadolinium-based contrast dyes to a patient with renal failure. The suit also asserts that the unknown makers of the dyes, "John Does," are strictly liable for the patient's injury because they defectively designed the contrast agents and knowingly failed to warn consumers about the health risks. Finally, the suit alleges that the products were negligently designed and that the companies negligently and fraudulently represented to patients that they were safe. The plaintiff seeks actual and punitive damages.
READ ABOUT MRI GADOLINIUM LAWSUITS

Click to learn more about LawyersandSettlements.com
LawyersandSettlements.com - A trusted, independent legal news provider bringing quality news and information on legal cases and lawsuits filed in the United States of America to its readers since 2002. Over 650,000 legal help requests including Defective Product Cases, Malpractice Cases, and Personal Injury Cases have been forwarded to lawyers all across to the country.