Another lawsuit has been filed against Injectafer manufacturers alleging failure to warn about the risk of hypophosphatemia.

Another Injectafer lawsuit filed in October 2020 joins numerous others filed since 2019, all claiming Vifor Pharma, Ltd., Daiichi Sankyo and its subsidiaries Luitpold Pharmaceuticals and American Regent failed to warn users about the risk of hypophosphatemia—a severe side effect whereby low phosphorous levels are caused by the multiple Injectafer injections. 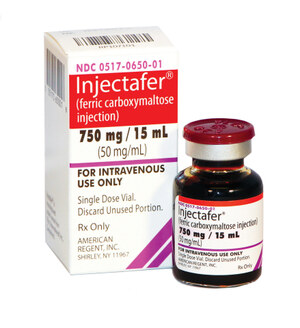 A flurry of lawsuits were filed after February 2020, when the FDA ordered the drug manufacturers to add “symptomatic hypophosphatemia” on the Injectafer label as a potential side effect. The most recent lawsuit was filed in the U.S. District Court for the Eastern District of Pennsylvania. Over a period of about one year, Savannah Brock was prescribed six Injectafer injections to treat her iron deficiency anemia, but it took some time to discover the nature of her injuries and damages and their relationship to Injectafer.

According to Brock’s complaint, she has “suffered, and will likely suffer in the future, severe and permanent injuries and damages, including, but not limited to: bilateral leg pain, shortness of breath, tachycardia, wheezing, malaise, nausea and vomiting, increased fatigue, achiness, headache, blurry vision, and stress due to her physical suffering.”

Like Brock’s lawsuit, Christa C says she developed hypophosphatemia after being treated for iron deficiency anemia with Injectafer. Her lawsuit also claims the manufacturers knew about these risks but failed to warn the medical community or patients being given the injections. Her symptoms-- chest pain, heart palpitations, shortness of breath, insomnia, bone and joint pain-- were so severe that she was unable to work for 10 weeks. The lawsuit was filed on April 24, 2020 in the U.S. District Court for the Eastern District of Pennsylvania — Case No. 2:20-cv-02019.


Hypophosphatemia (HPP) is defined as an electrolyte disturbance in which blood tests reveal that there is an abnormally low level of phosphate in the patient’s blood. Phosphorous, or serum phosphate, is critically important and vital to several of the body's physiological processes as it helps with bone growth, energy storage, and nerve and muscle production.


There are several levels of HPP, including mild, moderate, and severe. Severe HPP is a serious health risk, with symptoms that include muscle weakening, fatigue (potentially severe), severe nausea, and can also lead to serious medical complications including osteomalacia, arrhythmias, cardiac arrest, respiratory failure, and/or potentially rhabdomyolysis.

According to Brock’s lawsuit, the dangers of severe HPP are not just brought on by the extremely low levels of one’s serum phosphate, but also the duration (or prolonged period) of the severe hypophosphatemia. It claims that ferric carboxymaltose – and by extension, Injectafer –causes Severe HPP.

During the time that Brock was prescribed Injectafer (July 2018-June 2019)  the drug’s label mentioned the potential occurrence of hypophosphatemia and made no reference to severe HPP.  In fact, hypophosphatemia (not qualified as moderate or severe) was not listed in the “Warnings or Precautions” section or in a “Black Box” warning, but instead was listed as an “Adverse Reaction” occurring in greater than 2 percent of users.  The original label only referenced “transient” or “asymptomatic” low phosphorous.

Injectafer lawsuits accuse defendants Vifor Pharma, Ltd., Daiichi Sankyo, and its subsidiaries Luitpold Pharmaceuticals and American Regent, Inc. of downplaying Injectafer risks, and “at no times have attempted to warn users of these risks and have therefore violated their duties to warn and not misrepresent the benefits of a drug,” the lawsuit states. “Defendants have failed their duty to ensure safe, well-tested, well-monitored, and properly labeled products are entered into the pharmaceutical market.”