It could be said that California real estate transactions are complicated enough, without the risk of potentially paying more fees than you need to. One also assumes that a real estate transaction should be the one place that would be void of potential fraud. The Fidelity National Title Insurance Company case, which resulted in a $2.3 million settlement, is an indication that fraud can happen, so to speak, at home. 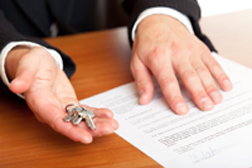 Fidelity is based in Jacksonville, Florida. However, the allegedly illegal real estate fees centered on transactions in California and were viewed as a kickback fee, or incentive fee, in exchange for using service providers listed in the TransactionPoint network.

According to the San Diego Union-Tribune (1/9/13), TransactionPoint was originally established as a means for those service providers engaged in the closing process of real estate to exchange electronic documents. Providers would include those involved in title search and registration, and escrow services, among others.

However, according to the real estate fee lawsuit involved in the Fidelity case, services such as title and escrow for real estate remains a competitive industry, with plenty of choice available to the consumer. In offering a fee to real estate brokers in exchange for using only those providers listed with TransactionPoint, the consumer loses that choice. Fidelity, while admitting to no wrongdoing, nonetheless violated federal laws that forbid companies from issuing fees or kickbacks during the settlement process of a home real estate transaction. It has been reported that Fidelity abandoned the use of TransactionPoint after questions surfaced in 2009.

States News Service (1/25/13) and the office of California Attorney General Kamala D. Harris released details of an arrest involving Ronald Vernon Cupp, of Santa Rosa. According to an investigation, Cupp promoted to struggling homeowners an opportunity to “kill” their mortgage debt via a series of six websites.

With the aid of accomplices, Cupp is alleged to have recorded fraudulent documents meant to satisfy preexisting mortgage debt, but in reality would serve only to delay foreclosure.

“Vulnerable California homeowners thought they were working to save their homes but were actually the victims of a fraudulent scheme,” Attorney General Harris said. “Today, it's not enough to dismantle the brick-and-mortar aspect of a criminal operation; we need to shut down criminal operations in cyberspace as well.”

Through an enterprise identified as North Bay Trust Services, unwitting homeowners were allegedly invited to pay upfront fees of between $1,000 and $10,000 with an eye to eliminating mortgage debt. “The suspects would then allegedly record fraudulent documentation purporting to be the attorney for the homeowner's actual lender and then relinquish the mortgage and record a new deed of trust in favor of North Bay Trust Services,” the statement said. “The debt to the original lender was never actually satisfied.”

Beyond the alleged illegality of these California real estate transactions is the reality that charging upfront fees is illegal in California. The three primary suspects charged face a 57-count complaint alleging theft, forgery, notary fraud and recording of false documents.

Click to learn more about LawyersandSettlements.com
LawyersandSettlements.com is an online news and information site for the general public and legal community. As a legal news resource, we have emerged as an independent & trusted voice. We provide detailed and quality information on various lawsuits filed including Financial Cases, Consumer Frauds, and Real Estate Cases.