Consumers who frequently write checks know there are NSF fees charged when there are insufficient funds in their account to cover a transaction. What they may not know is that instead of their check simply being declined, it can be sent to a check re-presentment (also known as check recovery) company for processing, and the company might be illegally charging them re-presentment fees. Tycko & Zavareei LLP is investigating a possible lawsuit against some companies involved in the re-presentment process, for charging fees without adequately notifying consumers. 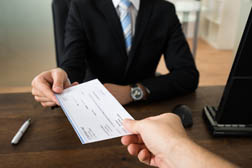 Here’s how check re-presentment works: Typically, when consumers write a check and there are insufficient funds in the account, the bank of the person or company that tried to deposit the check will send the declined check back to the consumer’s bank. The consumer is charged an NSF fee and the transaction is ended.

With check re-presentment, the merchant’s bank discovers the check was NSF but instead of sending the check to the consumer’s bank, the check is passed along to a re-presentment company. The re-presentment firm - a third-party company - then usually attempts to “re-present” the declined check at various times in an attempt to have the transaction processed.

The consumer may never know that the check was initially declined, because it is given to the re-presentment company and not returned to the consumer’s bank. In addition to making additional attempts to deposit the check, however, the re-presentment firm also reaches directly into the consumer’s bank account, without the consumer’s permission, to extract a fee. This can happen without the consumer knowing what the fee was for or what company it was paid to, and consumers who are charged multiple bank fees (such as overdraft or bounced check) might not even notice that someone other than their own bank is taking money out of their account. And that’s where the problem lies.

“In a lot of ways, it looks like an NSF fee that your bank would charge you,” says Andrew Silver, an attorney at Tycko & Zavareei. “But that’s not what it is, because the re-presentment company is a third party that you have no relationship with, and have not given permission to charge a fee. The re-presentment company is a legal stranger to you, and they are reaching in without permission and taking what they say is a legal fee.”

It might be difficult for consumers to tell if they have been charged a re-presentment fee. Consumers who frequently write checks but keep a low balance in their checking account could be at risk of unknowingly paying this fee, which can be anywhere from $20 to $60.


“Consumers should be vigilant and take a look at their bank statements to ensure all checks that appear there were checks they wrote,” Silver says.
“They can access their canceled check images, and if it looks like something they didn’t write, it’s an unfamiliar electronic check, or it’s to a company they don’t know, that’s a red flag. They can also look for fees - such as an electronic funds transfer (EFT) - that they did not authorize.”

Silver’s firm is in the early stages of investigating possible lawsuits against companies involved in the check re-presentment process, if those companies are not notifying consumers they may be charged re-presentment fees. Consumers across the United States who frequently write checks, do not carry a lot of money in their checking account, and believe they may have been unwittingly charged a re-presentment fee in the past four years (since around 2012), should consider speaking to an attorney about their options.

If you or a loved one have suffered losses in a similar case, please click the link below and your complaint will be sent to a consumer banking lawyer who may evaluate your claim at no cost or obligation.
Request Legal Help Now