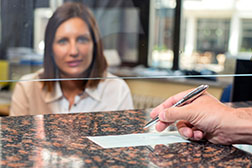 These actions are often called Bounced Check lawsuits because they basically begin with a bounced check. As Online Legal Media writer Heidi Turner explains, consumers are conditioned to expect an NSF (nonsufficient funds) notification when a check is issued for a product or service when there are insufficient funds in the account to cover the check. The bank or financial institution then issues an NSF charge - which it hopes you have money for - and the whole sad mess remains within the jurisdiction of the bank until it gets resolved. It’s their headache.

This is the point that plaintiff Travis Volden was making in his Bounced Check Ripoff lawsuit of 10 years ago (Travis Volden v. Innovative Financial Systems, Inc., Case numbers 04-3640 and 04-3641 in US Court of Appeals for the Eighth Circuit, March 10, 2006).

According to Volden’s rather complex Bounced Check Re-presentment lawsuit, he had written a series of checks for products and services acquired from two service providers in 2002. Those checks bounced. The credit union at which Volden did his banking sent the checks out for re-presentment, fees for which were charged.

According to the Bounced Check lawsuit, Volden eventually paid the debt and the subsequent charges with his credit card, but then took Innovative Financial Systems (IFS) to court over the fees he was charged.

According to court documents, three of the four dishonored checks were re-presented twice. IFS is described as having submitted a $30 collection fee plus sales tax for each check, with each re-presentment resulting in a $20 charge.

Volden, originally in district court, argued that IFS was acting as a debt collector and, as such, should be subject to the terms and conditions of the Fair Debt Collection Practices Act (FDCPA). He also argued that he had not authorized IFS to electronically collect fees from his accounts.

Under current law, service providers debiting a consumer’s account for any reason must provide proof that the consumer was informed of that possibility and had provided his or her consent. To that end, any debit of charges from a consumer’s account without his or her prior knowledge or consent - or without a specific contractual agreement and obligation - could be seen as circumventing the law.

As it turned out, Volden lost both his initial case and his appeal, with the appellate court affirming the district court’s summary judgment to the defendant. However, laws have been updated since that time. Any check re-presentment entity withdrawing funds from a consumer’s account prior to his or her knowledge and consent could, indeed, be breaking the law.

If you or a loved one have suffered losses in this case, please click the link below and your complaint will be sent to a consumer banking lawyer who may evaluate your Bounced Check Recovery claim at no cost or obligation.
Request Legal Help Now

Click to learn more about LawyersandSettlements.com
LawyersandSettlements.com - A trusted, independent legal news provider bringing quality news and information on legal cases and lawsuits filed in the United States of America to its readers since 2002. Over 650,000 legal help requests including Consumer Banking Issues, and Consumer Frauds have been forwarded to lawyers all across to the country.