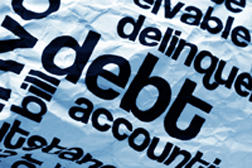 ABC News reports that Jessica Burke bought a car in 2007 and owed $350 in late payments on the car. A debt collector (whose real name and employer were kept private by ABC News) was eventually called in to obtain the money. In the course of doing so, the collector reportedly phoned Burke repeatedly, contacted her boss, told Burke he could find her anywhere and made remarks about her weight, including calling her “Porky Pig.”

According to the article, at one point the collector allegedly sent 15 messages a day, although the defendant said a collections manager from the car lot sent those texts. Burke said she repaid the debt but the harassment continued. After filing a lawsuit, Burke was awarded $33,000, but the collector has refused to pay.

The Fair Debt Collection Practices Act protects consumers from abusive practices at the hands of debt collectors. Among the rules set out in the act are prohibitions against harassing behavior, phone calls made at certain times of day and contacting the consumer’s employer.

More BILL COLLECTOR News
Debt collectors have faced lawsuits alleging they used abusive tactics to force consumers to pay debts. One such firm was reportedly charged with threatening consumers with jail time and having employees tell consumers they worked with the U.S. Marshals Service. According to court documents, Williams, Scott & Associates employees and the company operator “routinely tricked and coerced or attempted to trick and coerce thousands of victims throughout the United States into paying millions of dollars in consumer debts through a variety of false statements and false threats.”

Investigators allege WSA’s scheme targeted more than 6,000 victims in all 50 states and resulted in the company collecting around $4.1 million.

Posted by
B.B
on January 17, 2016
I still think about this each day how embarrassing it was that ***y Financial called me sometimes 3x in 1 minute all day long , my phone was totally useless that day, they called me over 300+ that I know of all in a few hours , is this harassment or just robocalling I say its harassment , they put me at risk cause I was at work and son at home , and to drive home in pitch dark road with no communication 20+ mules away , if something would of happen , of all the calls they never left 1 message.
Posted by
Ryan T
on July 16, 2015
Great article Heidi!

It's absolutely ridiculous how debt collection agencies can go about their business. Being called a "Porky Pig" is completely unacceptable in any situation of life. I'm not sure how common incidents like these are, but my sister personally went through something very similar to this.

Like Jessica, my sister owed some money for a car and she REPEATEDLY received phone calls while at work.

She got some advice and consulted with a professional. She won her lawsuit worth roughly $2,000.

Just goes to show you that you don't have to take abuse from these collection agencies and something can be done about it.

Posted by
Ahonda purchaser
on December 21, 2014
Wow that was horrible but it goes on everyday. I purchased a Honda Accord 2008 omg I did not know I was going to be tortured, harassed talk to like someone with an iq of 12. Ashley, Brittney, Juan, Eric and plenty more were very abusive. They reposssed my car for $700 after I paid them $23,000. I was very ill and in the hospital I told them the money will be coming in 7-10 they took it off my private property in the middle of the night devastation. When I went to pick my car up from their secret location in another part of the city there was at least 75 -100 cars sitting on the garage. Shame on Honda Financial. I truly emphasis with this story, sad I can't get compensated for all what they out me thru.