A well-known debt collector with some A-list clients is the target of a debt collector lawsuit deemed appropriate to advance as a punitive class action following a review of the proposed action by a federal judge, and his subsequent dismissal of a motion advanced by the defendant in an attempt to have the lawsuit dismissed. 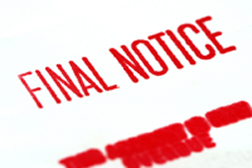 The bill collector lawsuit comes down to the language in a letter received by plaintiff Denise Harlan from North Shore Agency Inc. (North Shore), a defendant in the case.

According to provisions in the Fair Debt Collection Practices Act (FDCPA), a validation notice is required to be included in any collection letter, advising debtors of the process involved should a debtor want or need to challenge the validity of the debt, or any part thereof. It should be noted that according to FDCPA guidelines, debts can only be challenged in writing. A phone call will not suffice.

What raised the hackles of plaintiff Harlan was the placement of the FDCPA validation notice on the reverse side of the letter, buried amidst an array of other information - including irrelevant state notices - like so much fine print. On the facing page of the letter, an invitation to contact North Shore by phone was displayed more prominently.

The FDCPA requires, according to the plaintiff, that such validation notices be “prominent and conspicuous,” rather than hidden according to the correspondence she received from North Shore.

Plaintiff Harlan, in fact, took the letter she received from North Shore on behalf of North Shore’s client, Disney Movie Club, as bill collector harassment due to the incorrect placement of the FDCPA-mandated validation notice.

In his ruling, US District Court Judge Gene Pratter found that North Shore’s choice to place the validation notice on the back of the collection letter while more prominently inviting debtors to call North Shore by phone on the letter’s facing page, could serve to easily confuse the “least sophisticated debtor” given the conflicting language, according to court records.

“The court will observe that notwithstanding the remedial aims of the FDCPA, debt collectors, such as North Shore here, appear to treat the statute, still, as possible to overcome by gamesmanship,” Judge Pratter said in the opinion. “It seems that no debt collector would want to prominently display a notice of validation rights for concern that doing so would reduce the rate at which less sophisticated consumers simply pay to make the inconvenience (or intimidation) go away, even if the debt is not in fact valid.”

North Shore filed a motion to have the lawsuit dismissed, given its claim that the correspondence in question duly included all required information, including instructions on the front that directed the recipient to review details on the flip side.

However, plaintiff Harlan in her bill collector harassment lawsuit noted that in her view the validation language was “overshadowed” by other aspects of the letter.

More BILL COLLECTOR News
“Even if the standardized ‘least sophisticated debtor’ reads North Shore’s letter in its entirety, as she is presumed to do - and thus reads the advisement to turn the letter over and, turning it over, reads the notice of validation rights - and, even assuming that the notice of validation rights is otherwise proper, this text under ‘statement of intentions’ overshadows the notice,” the plaintiff says, in court documents.

The debt collector harassment lawsuit is Harlan v. Transworld Systems Inc., Case No. 2:13-cv-05882 in the US District Court for the Eastern District of Pennsylvania.

Posted by
Levius Toussaint
on May 18, 2014
I had harassment phone call from north shore collection several occasion about to collected money from me.
Posted by
Carlos
on April 27, 2014
Good job Harlen, lead the charge against these trashy collection agencies.