The Federal Trade Commission (FTC) has come down hard on individuals accused of debt collector harassment, and especially harassment that is directed at seniors in an attempt to extort money from them for debts they do not owe through the practice of deception and fear-mongering. 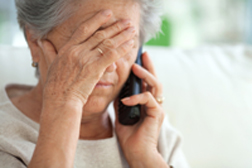 Seniors, the most vulnerable members of society, in that many live alone and are hampered by the onset of first-stage dementia, are more apt to respond to a threatening call, and pay money they can ill afford to pay for a debt they don’t even owe. The FTC views that as criminal, and, according to the Morning Call (Allentown, 11/3/13), is responding in diligent fashion. To that end, according to the Morning Call, a federal judge on October 21 issued a temporary restraining order against several businesses and individuals hailing from Atlanta, Cleveland and California, in an effort to stop them from applying bill collector harassment tactics to innocent consumers who either did not owe a debt at all, or at the very least did not owe the debt to the person from whom the call originated.

According to the Morning Call, one 83-year-old retiree from Allentown found the following message on her phone answering machine: “This is the civil investigations unit,” said the message. “We are contacting you in regards to a complaint being filed against you.” The debt collector harassment call, which was a recorded message, went on to suggest that the recipient had been named in a court action and faced a restraining order.

“I don’t know of anybody that I’m bothering,” the 83-year-old woman told the Morning Call. “Why would anybody have a restraining order?”

According to the report, this particular victim didn’t fall for the scam, in spite of being left scared by the phony call. However, according to the FTC, a sufficient number of consumers fell for the scheme and the perpetrators realized millions of dollars in profit.

The FTC, it is reported, logged almost 3,000 complaints about the debt collector harassment robocalls.

It is thought that consumer information gleaned from payday loan and other inquiries may have been purchased by the perpetrators in order to build a consumer database. The same kind of horse trading involving actual debt accounts often results in watered-down information and harassing calls to consumers who don’t owe a debt at all or may have long since paid the money back.

More BILL COLLECTOR News
According to consumer advocates, there are various responses available to consumers who face bill collector harassment. The Fair Debt Collections Practices Act, a federal statute, has various protections in place designed to stop harassing calls, regardless of whether or not you owe a debt. Informing a bill collector in writing, via registered mail, that you want the collection attempts to stop places the legal onus on the collector to verify the debt you owe. In many cases, they can’t.

Other consumers fed up with collection harassment will launch a debt collector lawsuit in response to various attempts by a collector on a bill that may or may not be owed, and the tactics used. For example, a collector can’t pose as a legal authority and threaten legal action.

That’s illegal. And that’s bill collector harassment at its worst. Current leadership in Washington is keen on further strengthening the Fair Debt Collections Practices Act, which has been on the books since the 1970s and in need of an update.

Posted by
Randy Wayne Fricke
on December 8, 2017
Ask for a certified/notarized copy of the contract binding CU Recovery and you in lawful contract. They can't give you one because it does not exist. I won a $6000 settlement against ERC (Florida) back in 2015 for robocalls. I hope it all works out for you.
Posted by
Fernando B. Careaga
on November 17, 2013
As a retiree, survive on a meager monthly pension and cannot afford thousands of dollars in attorney fees. Can you help me anyway?
****************************

I am submitting this lawsuit against a third party collection agency, resident of the State of Minnesota, who is in violation of the Texas Civil Practices & Remedies Code; Title 5 of the Texas Finance Code, and various sections of the Fair Debt Collection Practices Act (FDCPA). The account in dispute is #209151.

In February 2013, I learned that the creditor, Helena Community Credit Union, from here on referred to as (HCCU), in October 2010 had reported my account to the national credit bureaus as “Profit and Loss Write Off.” Refer to TransUnion credit report introduced as Exhibit A

On or about early ( July 2007), a collection agency named CU Recovery, Inc, of 26263 Forest Blvd, Wyoming, Minnesota 55092, begun sending me monthly statements saying that I already owed several hundred dollars “interest” over the initial amount which was recently (March 2007) reported to the credit bureaus by the creditor HCCU.

Due to the fact these illegal charges from CU Recovery, Inc date back to FY 2007, I do not have copies of the monthly bills this collection agency mailed me between 2007 and middle of 2009. However, despite my repeated requests to NOT call me at work, on or about early May 2009, a representative from CU Recovery, Inc, by the name Ann Elliot (877) 913-9169, called my office and left a recorded message. Ann Elliot threatened with filing a law suit against me, in a court of law, in order to recuperate the $5,913 original debt, plus $1,909.93 in alleged “accrued interest”. Refer to a one-page letter authored by me, dated May 25, 2009, responsive to Elliot’s recorded telephone message as Exhibit B

In retaliation for my letter addressed to Ann Elliot, on June 1, 2009, a second CU Recovery, Inc employee by the name Jim Polina sent me yet another bill claiming that I owed $7,822.93.

The language used by Jim Polina clearly states that my account was, and I partially quote; “being forwarded for further review to determine whether this account should be “pursued through litigation.” Refer to copy of the bill sent by Jim Polina introduced as Exhibit C

The reason I wanted to ascertain if Jim Polina and/or/ Ann Elliot were planning to pursue their charges via litigation was based on the Texas Statute of Limitations (SOL).

In desperation for such violation of consumer rights performed by CU Recovery, Inc, I sent a three-page letter, dated September 16, 2010. This time, I wanted to maintain an official record of my written communication, so I sent the letter via Certified Mail #7010 0290 0002 2264 5598.

In my letter, I was very specific as to what response I was expecting from CU Recovery, Inc. I requested a THIRD PARTY DEBT COLLECTOR, DEBT VALIDATION. Further, I requested a copy of the Texas surety bond certificate that authorized CU Recovery, Inc to collect third party debts in the State of Texas.

Furthermore, I requested confirmation of what part of Title 5, Texas Finance Code, Section 392.303(2) authorized CU Recovery, Inc, to collect “interest” from a debt that was not theirs. CU Recovery, Inc chooses not to respond my VALIDATION of a debt, and ignored my request. Refer to a three-page letter introduced as Exhibit F

Referring to the same three-page letter dated September 16, 2010, third paragraph, I recorded my telephonic conversation with a third individual employee who refused to identify himself except to tell me that his name was “Linus.” His telephone number is unlisted (877) 415-8220. My conversation with “Linus” took place on September 3, 2010.

“Linus” verbally stated that as of September 8, 2010, my account grew to $9,570.97 from the original debt of $5,913, and “Linus” stated that it continued to “accrue interest.” Furthermore, “Linus” stated that CU Recovery was obligated to pay back 10% of my debt to the Helena Community Credit Union. Refer to the three-page letter I authored as Exhibit F

I copied the Texas and Minnesota Attorney Generals with my September 16, 2010 letter, requesting their assistance to resolve this matter in an amicable way, to no avail. I was ignored by both state agencies. Refer to one-page letter response from State of Minnesota, Attorney General dated October 11, 2010 introduced as Exhibit G

Back in September 2010, I researched the official Texas Secretary of State website; http://direct.sos./debtcollector/DCsearch.asp and was unable to find a surety bond issued to CU Recovery, Inc by the State of Texas.

By one-page collection bill dated July 16, 2013 received at my mailing address on July 19, 2013, and after thirty-four (34) months of not responding to my September 16, 2010 letter requesting a VALIDATION of debt; CU Recovery, Inc re-opened my window of opportunity to file a lawsuit. This time, in defiance of Texas Finance Code, Texas Civil Practice & Remedies Code; and outstanding Fair Debt Collection Practices Act (FDCPA); Jim Polina, CU Recovery Inc representative increased “my debt” to $10, 250.81. This is an increment of $4,337.81 of the original debt that HCCU “wrote off” back in October 2010, according to TransUnion records. Refer to one-page bill prepared by Jim Polina, CU Recovery, Inc, introduced as Exhibit H

By failing to respond my lawful request for VALIDATION OF A DEBT, submitted on September 16, 2010, CU Recovery, Inc. tacitly accepted that its collection efforts were illegal.

Once again, in order to ascertain that CU Recovery Inc did not have a surety bond with the State of Texas in FY- 2013, I researched the Texas Secretary of State official website;

http://direct.sos.state.tx.us/debtcollectors/DCsearch.asp and was unable to find a surety bond assigned to CU Recovery, Inc. As before, Jim Polina mailed me a threatening bill dated July 16, 2013, stating and I partially quote; “further review to determine whether this account should be pursued through litigation.” (Emphasis added.)

CU Recovery, Inc is in violation of Title 5, Texas Finance Code, Section 392.303(2) for illegally charging me $4,337.81 in alleged “accrued interest” and refusing to provide me with proof of their legal right to charge me interest.

In my request for VALIDATION OF A DEBT, dated September 16, 2010, I specifically requested from CU Recovery, Inc. a copy of the original contract I signed with HCCU, where it stipulated that any third-party collection agency was authorized to charge me “interest” during and after the Statute of Limitations expired.

As I explained to COMO Law Firm, on September 16, 2010, I mailed a three-page Validation of a Debt to their client, and CU Recovery, Inc. failed and refused to validate the alleged debt back in September 2010.

As I explained to the attorney calling, in my Certified Mail # 7012 3460 0003 5024 2702, I specifically requested from COMO Law Firm to respond in writing and submit a DEBT VALIDATION. My request was based on being COMO Law Firm a legal representative of a third-party collections agency, and COMO Law Firm should abide by Title 5, Finance Code, Chapter 392, Section 392.202.

As of November 14, 2013, nobody from the COMO Law Firm responded or addressed my DEBT VALIDATION, therefore, I am pursuing this case in a court of law to obtain a legal remedy.

By contacting me in writing and over the telephone on July 16, 2013, CU Recovery, Inc is voluntarily re-opening the window of opportunity for me to file a lawsuit against this third party collection agency. As explained in Exhibit H

I tried to solve this matter via the lowest level possible, hoping the State of Texas and State of Minnesota would help to stop the violations committed by CU Recovery, Inc, to no avail. My requests were ignored. I have no other recourse, but to bring this matter before a court for a legal remedy.

Under Title 2, Civil Practice and Remedies Code, Chapter 15, Section 15.002 (Venue) and Section 15.005 (Multiple Defendants), the Court has venue of all the defendants in all claims and actions.