Toning shoe lawsuits have been filed against the makers of tone-up shoes alleging that the shoes were defectively designed and caused harm to people who wore the shoes. Among the claims in some toning shoes lawsuits are that the shoes were falsely advertised, including misleading statements about the health benefits linked to the shoes. Among companies involved in litigation are Reebok toning shoes and Skechers Shape-up Shoes.

Send your Toning Shoes claim to a lawyer who will review your claim at NO COST or obligation.
GET LEGAL HELP NOW 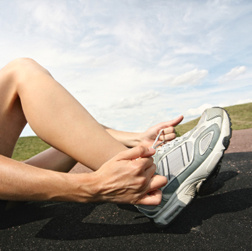 Toning shoes are marketed as shoes that help people get into shape simply by wearing them while walking. The shoes have a "rocker bottom" which is meant to provide some instability to the walk, making the person's legs work harder during normal activities. Shoemakers promise that the shoes will provide the wearer with health benefits. Among the reported promises by the shoemakers are that the shoes promote weight loss, tone muscles, improve posture and reduce stress on joints in the legs.

According to The New York Times (09/28/11) toning footwear resulted in sales of more than $1 billion in 2010. Meanwhile, Reebok sold more than five million pairs of toning shoes in 2010.

Critics argue, however, that the shoes do not work and, furthermore, that they cause injuries. Toning sneaker injuries include stress fractures, joint injuries and tendon ruptures. Critics also argue that because the shoes are unstable, people wearing them can suffer falls that cause harm, including violent ankle fractures. The Consumer Products Safety Commission reportedly received 65 toning shoe complaints from consumers between March and July 2011 (as cited by Trial Magazine). Among the toning shoe complaints were significant compound fractures caused by regular walking activities, and broken wrists and traumatic brain injuries caused by a fall while wearing the shoes.

A lawsuit has been filed against Skechers, alleging Skechers Shape-up shoes can cause serious injury. According to ABC News (02/16/11), the plaintiff in the Skechers toning shoes lawsuit alleges she developed stress fractures in both hips after wearing the shoes, and now requires physical therapy and pins in her hips because of the injuries. The plaintiff, Holly Ward, says she wore the shoes as a waitress and while on walks for five months and developed the stress fractures, despite having a healthy bone density. 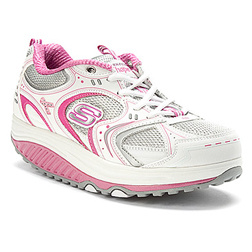 In September 2011, Reebok International agreed to pay $25 million to settle allegations that the company made false claims about its toning shoes. The lawsuit was filed by the US Federal Trade Commission (FTC) and alleged the company's claims that the toning shoes provided extra muscle strength were unsubstantiated. Specifically, the claim that the Reebok EasyTone and RunTone shoes "strengthen and tone key leg and buttock (gluteus maximus) muscles more than regular shoes" (as quoted by Reuters; 09/28/11) was considered misleading.

Furthermore, the FTC took issue with Reebok's claim that Reebok EasyTone shoes strengthen hamstrings and calves by up to 11 percent, while they tone the buttocks up to 28 percent over regular sneakers. The $25 million was to go toward refunding customers.

If you or a loved one has suffered damages in this case, please click the link below and your complaint will be sent to a toning shoes lawyer who may evaluate your claim at no cost or obligation.
Please click here for a free evaluation of your Toning Shoes claim
Last updated on Mar-29-12

Toning shoes may be good shoes, but do they deliver the promised benefit? That's the question that surrounds a number of manufacturers of so-called toning shoes that put forth various claims and added-value benefits such as toned hamstrings, simply from wearing a certain shoe. Angry consumers are demanding refunds, while some who have sustained an injury due to the shoe have filed a toning shoes lawsuit.READ MORE
Experts Warn About Toning Shoes Injuries

In theory, the idea of Skechers Shape-up shoes and Reebok toning shoes is great; after all, why not design a shoe that helps a person build muscle while carrying out daily activities? But according to various toning shoes lawsuits and critics of the shoes, not only is there an increased risk of toning shoes injury, the shoes do not work as promised.READ MORE
Concerns Raised about Toning Shoes

When it comes to dangerous shoes, most people probably think of six-inch stilettos as being the most dangerous thing out there, but according to some reports, the number of toning shoes injury complaints indicates that toning shoes and shape-up shoes might give stilettos a run for their money. Toning shoes lawsuits have been filed, alleging the shoes not only do not help people get in shape but can also cause serious injury to consumers.READ MORE

Posted by
danielle Guertin
on August 23, 2019
I have bought a pair of Exersteps Step 2 rocker shoes and now have achilles tendonitis in the right foot.
Posted by
Brinda Houchins
on August 5, 2015
Skechers Shape-Up Shoes has caused me so much pain. I thought it was because they were new and hard to adjust to but I have had nothing but pain in my feet and legs and back ever since I started wearing them. I went to the Dr. and was told caused from the sport shoe I was wearing. I have leg cramps so bad, I cried.
Posted by
Idaho
on November 13, 2012
I got second degree burns on both my hands and most of my fingers from falling on a wood stove. I was wearing those MBT shoes at the time.
Posted by
Connecticut
on October 12, 2012
I had my danskin now shoes on and went out the door. went to take the first step down and down i went. I went to the ER and was placed in a soft cast until the swelling went down. Still having trouble with swelling in the ankle due to the fall in the shoes.
Posted by
Oklahoma
on August 23, 2012
Persistent pain in achilles tendon of Left foot
Posted by
Virginia
on May 25, 2012
While wearing the toning shoe (Champion Brand), I fell and had to be rushed to a hospital, where I had surgery. The doctor put pins and screws in my leg. Had to have a second surgery because the screws from the first one did not hold. I am in a cast right at thie very moment.
Posted by
Florida
on April 8, 2012
While wearing my Sketchers Shape Ups, I lost my balance walking up my driveway and fell. As a result of this fall I fractured my knee cap. This happened on Good Friday 2011. I had to go to the emergency room for treatment.