Send your Stryker Orthopedics Rejuvenate claim to a lawyer who will review your claim at NO COST or obligation.
GET LEGAL HELP NOW 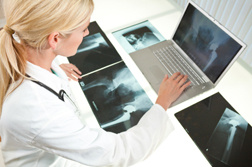 New research has shown a connection between the type of corrosion with the Stryker Orthopedics Rejuvenate Modular Hip System (below) and local soft tissue destruction. Previously some Stryker Rejuvenate patients did not have legal recourse because hip replacement attorneys were only accepting metal-on-metal claims. Now that this new report has found a potential link with components in the Stryker Orthopedics Rejuvenate Modular Hip System device, Stryker Rejuvenate claims are being investigated and litigation is underway.

A report in The Journal of Bone and Joint Surgery (May 15, 2013) studied 12 hips in 11 patients who underwent total hip arthroplasty with a modular femoral stem design by Stryker Rejuvenate, consisting of a titanium-molybdenum-zirconium-iron alloy body mated with a modular cobalt-chromium alloy neck. Upon revision surgery, all 11 patients showed local soft tissue destruction with visible corrosion at the femoral neck-body junction. And they also had increased levels of chromium, cobalt and titanium in their blood, which indicates metallosis.

This new research indicates that patients implanted with the recalled Rejuvenate and ABG II Modular-Neck Hip Stems should be evaluated for local tissue reactions (i.e., necrosis in surrounding tissue) and blood testing to ensure their hips are functioning properly and to prevent further complications such as metallosis, even if they are not experiencing any Stryker hip side effects. And it has paved the way for Stryker Hip recall lawsuits.

Stryker has responded to concerns about the Rejuvenate failure rate by alleging patients did not properly undergo rehabilitation following surgery, or by blaming doctors' implantation techniques. In a Product Correction Bulletin (04/25/12), Stryker officials noted, "Factors such as diabetes and infection may play a role in potential corrosion of an implant as these conditions may affect the pH of the tissue surrounding the implant."

Metallosis is an adverse tissue reaction to heavy metals in the body. It can cause pain, limited mobility, failure of the hip joint, pseudo-tumors, dissolution of the bone, DNA changes and chromosomal aberrations. Patients who have had their Stryker Rejuvenate hip implant device fail may have undergone revision surgery. Typically, hip implants are expected to last 15 to 20 years. In some cases, the Stryker Rejuvenate hips are failing in less than five years.

In July 2012, Stryker voluntarily recalled its Rejuvenate and ABG II modular-neck stems from the market. The products were recalled due to reports of fretting and corrosion. According to some reports, the FDA received two adverse events linked to the recalled devices, including one in which the device was removed.

On May 28, 2012, Health Canada announced that Stryker Rejuvenate was being recalled so the instructions for use could be updated. The recall affected only Rejuvenate devices sold in Canada and was based on a reported rate of less than one percent for revisions associated with the Rejuvenate.

Since the Stryker Orthopedics Rejuvenate Modular Hip System Recall last July 2012, an increasing number of Stryker hip replacement lawsuits continue to be filed nationwide. The Stryker hip claimants allege complications including Stryker orthopedics metallosis, osteolysis (dissolution of bone) and necrosis in tissue surrounding the implant. As of May 2013, more than 160 Stryker hip recall lawsuits have been filed in a consolidated litigation currently underway in New Jersey's Bergen County Superior Court. Eighty-one claims have already been filed in the New Jersey litigation early in 2013. Plaintiffs in the federally-filed Stryker hip replacement lawsuits petitioned the U.S. Judicial Panel on Multidistrict Litigation (JPML) to establish a consolidated proceeding for those claims in a single federal court.

A case management conference has been scheduled for June 18 by Judge Brian R. Martinotti, who is overseeing the New Jersey Stryker hip recall litigation. The lawsuits claim that patients with Stryker Rejuvenate and ABG II hip stem recall are entitled to compensation for lost wages, medical bills, and pain and suffering.

If you or a loved one has suffered damages in this case, please click the link below and your complaint will be sent to a lawyer who may evaluate your claim at no cost or obligation.
Please click here for a free evaluation of your Stryker Orthopedics Rejuvenate claim
Last updated on Jun-6-13

Not All Stryker Recall Lawsuits Are Filed by Patients

Minneapolis, MN: Not every Stryker recall lawsuit is filed by a recipient, and not every Stryker injury is a physical injury suffered by a patient. To that end, a lawsuit filed against Stryker by an orthopedic surgeon and his practice claims injuries to the business amidst allegations of negligence, negligent misrepresentation and fraud on the part of Stryker.READ MORE
Amidst Stryker Lawsuits, Calls to End FDA Fast-Track Loophole

When one considers that a full premarket approval (PMA) process for a new medical device is measured in years, the mere two months it took to get the Stryker Rejuvenate Modular Hip System approved for market seems remarkably short. This is especially true considering the relatively high failure rate and the subsequent voluntary recall of the Rejuvenate system by the manufacturer just a few short years after bringing the hip replacement system to market.READ MORE
Stryker Orthopaedics Rejuvenate Modular Hip System Recall Compensation on the Way

The arrival of a settlement check in the mail at the start of summer vacation season would otherwise be considered a godsend. Imagine extra cash in hand for day tripping, or for landscaping, or to start a college fund or some insurance policies for the grandkids. However, for victims of Stryker Orthopaedics metallosis, that money is likely going to pay medical bills, with a little left over as compensation for any pain and suffering experienced through dealing with the failed device.READ MORE

Posted by
Maryland
on March 23, 2014
I received two Stryker knee implants, one in 2009 and the other in 2010. I've been having problems with my knees swelling, cracking, dull and sharp pain, and other issues. I contacted the company and they said they would look at my medical records for the replacements to see if the knees had problems. My doctor has exhausted all his resources in what to do for my knees. When I called the Complaint Administrator a week ago, they told me she was no longer with the company. She did get a copy of my medical records and told me that the knees should not be cracking.
Posted by
Nevada
on December 22, 2012
I have had to file for disability because I can not work anymore. I have had to move in with family because I can not afford and I am not able to take care of myself. I am severe constant pain. It has totaly taken away my life.