Were you looking for Stryker Hip Replacment Lawsuit lawsuits?

Send your Stryker Accolade claim to a lawyer who will review your claim at NO COST or obligation.
GET LEGAL HELP NOW 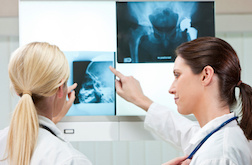 The Stryker Accolade TMZF is a hip implant device made by Howmedica (a subsidiary of Stryker Corporation). Unlike other new hip implant devices, which are metal-on-metal, the Accolade TMZF is made of a proprietary blend of titanium, iron, molybdenum and zirconium (TMZF), which was marketed as being stronger and more flexible than other alloys. Some studies, however, suggest Stryker Accolade may also be at risk of failure, including dissociation of the femoral head from the stem, and metallosis.

Both the Accolade TMZF and the Accolade 2 stems use the LFIT V40, which is reportedly linked to a higher risk of taper lock failure and other problems. As a result of these issues, Health Canada issued a recall of certain lots of the device but the US Food and Drug Administration has not followed suit.

Among the concerns about the Stryker Accolade TMZF and Accolade 2 hip implant systems is the risk of spontaneous dissociation, which occurs when the femoral head of the hip implant detaches from the stem. Patients may reportedly suffer sudden, catastrophic dissociation or dislocation of the implant, even without previous symptoms of a problem. In cases of spontaneous dislocation, the patient may require emergency surgery to replace the hip implant.

Warning signs that there is a potential problem with the hip implants include pain, swelling, and reduced mobility of the hips.

In 2015, The Journal of Bone and Joint Surgery has recounted two situations in which patients suffered premature failure of their hip implants. The first was the story of a 62-year-old male who developed severe pain and limited mobility seven years after hip implant surgery during which he received a Stryker Accolade TMZF hip implant system. In addition to dissociation, the patient also developed substantial metal debris in surrounding joint lining and fluid (metal debris absorbed by surrounding tissue is often referred to as metallosis). The second story recounted was that of a 65-year-old male who also developed pain and limited mobility seven years after receiving his Stryker Accolade TMZF system. He was diagnosed with dissociation of the femoral head and metallosis. Both patients included in the report underwent revision surgery.

Metallosis occurs when metallic debris is absorbed and builds up in the patient's soft tissue. It is linked to pain, metal poisoning, and bone and tissue death. It can also cause implant failure. Metallosis has been linked to metallic debris that comes loose from metal-on-metal hip implants. A 2014 study in The Bone & Joint Journal suggests that the Trident-Accolade total hip replacement is also linked to an increased risk of elevated metal ions in the blood. Patients who develop metallosis may require revision surgery to replace their hip implant system.

Attorneys are investigating potential lawsuits against Stryker alleging patients who had the Accolade implanted were put at higher risk of premature device failure.

If you or a loved one has suffered similar damages or injuries, please click the link below and your complaint will be sent to a lawyer who may evaluate your claim at no cost or obligation.
Please click here for a free evaluation of your Stryker Accolade claim
Last updated on Oct-22-16

New York, NY: Patients who had certain Stryker hip replacements implanted but found themselves ineligible for the 2014 Stryker hip settlement received some good news. Those patients who had the Stryker ABG II Modular Neck Hip Stem and Rejuvenate Modular Neck Hip Stem implanted from 2014 to December 19, 2016, are now eligible to take part in the 2014 settlement. The announcement does not affect the Accolade TMZF, but settlements in lawsuits concerning other hip replacement devices could indicate a willingness to settle Accolade claims.READ MORE
Health Canada Recalls Certain Stryker Hip Lots

Posted by
Sharon Little
on January 17, 2017
Implant put in January 2015, came apart, removed December 2015. Could not be replaced, not enough bone structure left to replace. Parts had destroyed bone tissue.