Were you looking for Stem Cell Therapy Web Sites lawsuits?

Stem cell treatments have been defined as both miracle treatments and snake oil. The public has heard from researchers and licensed doctors, unlicensed frauds and for-profit companies that stem cell therapy can regenerate hair and organs, cure cancer and emphysema, and eradicate deadly infectious diseases. It is commonly used in plastic surgery and eye surgery, often resulting in devastating and permanent injuries.

Send your Stem Cell Treatment claim to a lawyer who will review your claim at NO COST or obligation.
GET LEGAL HELP NOW

The FDA has warned patients for many years that unproven stem cell therapies are unsafe and possibly dangerous, hence the need for stringent regulation. Currently, the CDC states that the only stem cell and exosome (below) products approved by the FDA are those for the treatment of certain cancers and disorders of the blood and immune system.

Scientists can isolate and generate pluripotent, or “master” stem cells, which can theoretically produce any cell or tissue the body needs to repair itself, and they can make cells from all layers of the body. Researchers grow stem cells in a lab, which
are then manipulated to specialize into specific types of cells, such as heart muscle cells, blood cells or nerve cells. They can develop into blood, brain, bones, and all of the body’s organs. 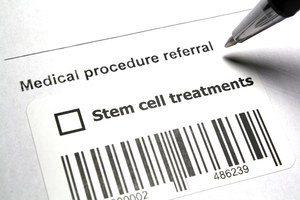 Proponents say it will replace organ transplantation by using cells instead of donor organs, which are in short supply. Theoretically, the benefits are wide-ranging. For instance, stem cell therapy supporters say it can help:
Stem cell therapy has the potential to repair, restore, replace, and regenerate cells, and can potentially be used to treat many medical conditions and diseases, according to the FDA. There are different types of stem cells:

All stem cell products used as therapy must be FDA-approved and manufacturers must show sufficient data from animal studies to help evaluate any potential risks associated with their products.

2016:  The FDA warned at a public workshop of severe adverse events associated with stem cell therapy.  One patient became blind due to an injection of stem cells into the eye. Another patient received a spinal cord injection that caused the growth of a spinal tumor. Other potential safety concerns for unproven treatments include:
March 2017: The New England Journal of Medicine published an article by the FDA detailing the benefits and risks of stem cell therapy. The agency recognizes the benefits of hematopoietic stem cells (an immature cell that can develop into all types of blood cells) and has only approved stem cell-based products derived from cord blood and some from bone marrow.

A list of approved stem cell product are listed on the  FDA website and The International Society for Stem Cell Research has developed a “Patient Handbook on Stem Cell Therapies,” which is in agreement with the FDA, stating that “Other stem cell treatments are still experimental. This means that it has not yet been shown that this treatment is safe or that it will work.”

Despite these warnings and regulations, for-profit companies claim their “revolutionary treatments” can cure various conditions. Stem cells from adipose (fat) tissue are being used illegally to treat multiple orthopedic, neurologic, and other diseases with negligible clinical evidence or safety.

December 2019: The FDA received reports from the CDC of serious adverse events with products marketed as containing exosomes. The FDA has not approved any exosome products and all exosomes used to treat diseases and conditions in humans are subject to premarket review and approval requirements. However, certain clinics across the U.S., including some that manufacture or market violative “stem cell” products, offer exosome products to patients.

(The definition of Exosomes is difficult to describe to the non-scientific community. As described in the Journal BMC Biology, exosomes, up until recently, were considered cellular waste disposal. Now they are thought to “provide a means of intercellular communication and of transmission of macromolecules between cells; they have been attributed roles in the spread of proteins, lipids, mRNA, miRNA and DNA and as contributing factors in the development of several diseases. And they have been proposed to be useful vectors for drugs because they are composed of cell membranes, rather than synthetic polymers, and as such are better tolerated by the host.”)

There’s no need to leave the U.S. for stem cell treatment. By June 2019, more than 900 private stem cell clinics had opened nationwide, claiming stem cells will cure everything from arthritis to autism to erectile dysfunction. “It's kind of like the Wild West. It's as though people can just go and set up a shop and say we can cure anything with these cells as though they have magical powers not defined by biology or physics and they just wait for people who are desperately ill to come in,” Chuck Murry, MD, PhD, Director, Institute for Stem Cell and Regenerative Medicine at the University of Washington Medicine, told wquad news.

In 2009 and again in 2011, two patients in Florida died during stem cell treatment performed by the same doctor, reported CNN.
Also in 2011, Scientific American reported that after a face lift using her own stem cells, a Los Angeles resident couldn’t open her eye without considerable pain and that every time she forced it open, she heard a strange sound— bone fragments grinding against one another. Clinics employing licensed doctors have (so far) avoided heavy regulation, mainly because they use cells extracted from a patient’s own body and because they don’t do much to those cells before re-injecting them.

There is also financial risk.  Critics say there’s no evidence the treatments work, and doubt that some therapies even contain stem cells. Yet clinics charge fees ranging from $5,000 to over $100,000.

The FDA says people need to ask stem cell clinics if they are part of the few clinical trials that are FDA-approved. Clinics need FDA licenses and approval to sell and use stem cells, which are classified as biological drugs. Health professionals who promote clinics say these licenses would require evidence that stem cell treatments are both safe and effective, but that kind of proof takes drug companies many years of clinical trials and millions of dollars to obtain.

In June 2019, a Florida federal court entered a permanent injunction against U.S. Stem Cell Clinic and U.S. Stem Cell Inc., reported the Los Angeles Times. Two years previously, an FDA inspection found U.S. Stem Cell was treating many serious diseases or conditions, including Parkinson’s disease, amyotrophic lateral sclerosis, chronic obstructive pulmonary disease, heart disease, and pulmonary fibrosis—none of which had been approved. U.S. Stem Cell claimed that it was exempt from FDA oversight because its treatments involved the use of a patient’s own cells. The FDA rejected the argument, as did a federal judge.

In April 2019, the New York state attorney general filed a lawsuit against Image Plastic Surgery, Park Avenue Stem Cell, and a doctor named Joel B. Singer for allegedly engaging in fraudulent and illegal advertising regarding its stem cell procedures. This stem cell clinic markets adipose (fat) stem cell injections for a variety of health conditions.  Cell Surgical Network owns Park Avenue Stem Cell. Cell Surgical, which has over 100 stem cell clinics across the nation, is facing a federal lawsuit and a number of patient lawsuits of its own.

A San Diego federal judge in June 2019 granted class-action status to a lawsuit against StemGenex. The stem cell clinic customers allege their $14,900 treatments were ineffective in treating lupus, diabetes, multiple sclerosis and other conditions, according to the San Diego Tribune.  Plaintiffs say they were coerced by a claim on the StemGenex website that patients experienced 100% satisfaction.

If you or a loved one has suffered similar damages or injuries, please fill in our form and your complaint will be sent to a lawyer who may evaluate your claim at no cost or obligation.
Please click here for a free evaluation of your Stem Cell Treatment claim
Last updated on May-27-20

Posted by
Lyn Rains
on February 10, 2020
Having had left knee replacement surgery I did not want to have the other knee done so soon, but that is what I was facing. Low and behold, seems like I might not have to because of stem cell injections. REVIVE in Sturat FL was offering just what I was hoping for. So I fell for the con game supposed a supposed Dr. Domenic Lacevone was selling. This new technology would save the day for me. Stem cell injections, and in less than a 4 week turnaround time sand one-time procedure with a 94% success rate, this is the sure way to prevent unwanted surgery. My understanding now is - this is false advertising. I was ripped off $15,000. Charged on my Discover, and checked out by the Center for Bone and Joint Surgery, confirming I would need surgery as the stem cell injections are a hoax, not approved by FDA. Well that is it, not paying for fake procedures. My charge is in dispute and I want back at least $100,000,000.00 actually, even that is too low.
Thanks, so happy for this class action law suit because every word is true. Real cons are making a killing off this treatment, for the rich in FL. that will fall for a Perfect Ponzi Scheme.