Each year hundreds of scuba divers and snorkelers are injured, many of whom are killed, in diving accidents. Most dive accidents are preventable; they can occur as a result of improper scuba instructor training , inadequate dive training and/or supervision, equipment failure, dive buddy negligence, and poor judgment. An experienced personal injury lawyer can determine whether you have a diving accident claim and Scuba diving lawsuit

Send your Scuba Diving & Snorkeiling Accident claim to a lawyer who will review your claim at NO COST or obligation.
GET LEGAL HELP NOW 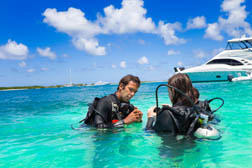 The most dangerous diving injury is decompression sickness or "the bends", which occurs when a diver returns to the surface too quickly. It can cause brain damage, paralysis and even death.

According to Divers Alert Network (DAN), inadequate training and lax buddy practices are the two common causes of diving accidents. An average of 1 in every 211,864 dives ends in death for an estimated total of 150 deaths per year in the US, according to 2010 statistics. Fifty percent of diving fatalities happen with people who have less than 20 dives. Currently, there are about 9 million certified divers in the US.

Diver accidents can result from:

Most all dive schools and outfitters pass rigorous certification requirements, but serious dive injuries and deaths can still occur on boat decks and beneath the ocean as a result of the negligence of a dive instructor, boat operator or dive shop. And not all PADI diving instructors provide the same amount of training and supervision. For instance, "Discover Scuba Diving" programs were developed by Caribbean dive operators who taught only the most basic skills needed to dive briefly under supervision--it allowed tourists to try diving before obtaining certification. Some experts believe that instructors were better trained and more experienced in the past than they are today.

Student/instructor ratios have been lowered to four students per instructor, (from 6:1 to 4:1 around 2001) but incidents and fatalities have increased. And so too have scuba diving lawsuits. 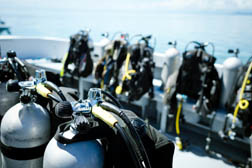 When a diving accident occurs, one or more of the following parties may be involved in a personal injury lawsuit or wrongful death lawsuit:

Scuba diving equipment that is not regularly maintained can seize up or cease to work, and the diver could suffer from lack of oxygen. Sometimes the manufacturing company is at fault by using poorly designed or substandard equipment.

Although a recreational scuba diver, SNUBA divers and snorkelers are typically required to sign a liability waiver and release from the certifying agent, dive resort, boat owner and operator, or charter company, no waiver can completely release such parties from responsibility.

Two boys, aged 12 and 13, and the father of the latter participated in a Discover Scuba Diving program (DSD) led by a PADI instructor in 2011. During the dive they all followed a line, first for the descent and then to ascend and return to shore. But the father had buoyancy issues, panicked and ascended to the surface. The instructor signaled to the two boys to stay together and hold on to the line while he helped the adult in distress. When the instructor returned to the safety line, the boys were missing. One boy was found safe on the surface, but the other was found unconscious on the bottom and subsequently died.

Experts criticize DSD for its lack of direct supervision. Accidents happen when a separation occurs, and they are now calling for a mandatory two instructors. Some experts also believe a 12-year-old is too young to participate in a DSD program.

In 2012, two scuba divers hunting lobsters apparently ran out of air and died trying to surface. Judy Boone allegedly tried to save her diving "buddy" Kevin Moss, who had Parkinson's disease. A lawsuit was filed by Boone's family against the dive charter, the dive boat' captain, and the estate of the other diver. The lawsuit claims that Dixie Divers and David Leith provided Moss with substandard equipment, then failed to monitor the divers properly. The suit also says that Kevin Moss was negligent in running out of air, and it states that he did not allow Boone to surface.

Sometimes as part of a resort vacation or ocean cruise package, novice scuba divers, SNUBA divers (part scuba, part snorkel) and snorkelers are given minimal training and education, and then left to fend for themselves. Resulting injuries can be serious, and can include:

A North Carolina man snorkeled at a Sandals Resort excursion. The man filed a lawsuit against Sandals, alleging the resort failed to provide proper instruction and rushed people aboard the excursion boat without checking whether the snorkeling equipment handed out was in good working order, according to court documents. His mouthpiece failed and his lungs began to fill with liquid when he was in the water. He tried to swim back to the boat, blacked out and began to drown. He was later revived by other guests, who happened to be medical doctors.

If you or someone you know has been in a scuba diving or snorkeling accident, please click the link below and your complaint will be sent to a diving accident lawyer who may evaluate your claim at no cost or obligation.
Please click here for a free evaluation of your Scuba Diving & Snorkeiling Accident claim
Last updated on Mar-30-16