Infants who were exposed to Pristiq prior to birth may be at an increased risk of developing Pristiq side effects, which may include Pristiq birth defects. Side effects of Pristiq in newborns may include heart and lung defects, or developmental delays. Pristiq drug is in a class of medications known as serotonin-norepinephrine reuptake inhibitors (SNRIs) and is used to treat depression. SNRI medications may have similar side effects to selective serotonin reuptake inhibitors (SSRIs).

Send your Pristiq claim to a lawyer who will review your claim at NO COST or obligation.
GET LEGAL HELP NOW 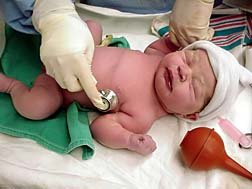 Pristiq, known generically as desvenlafaxine, is used to treat depression in adults. It is available only by prescription. Although studies have been conducted on the side effects of SSRI medications in infants, fewer have been done on SNRI medications. Because the medications are similar it is possible that they are linked to similar side effects.

A study published in the March 2010 issue of Pediatrics suggested that use of antidepressants during the second or third trimester of pregnancy was linked to an increase in developmental delays. Among the delays listed were sitting up without support later, walking without support later, and more difficulty occupying themselves than children not exposed to the antidepressants.

Some research indicates that maternal use of an SSRI medication during the first trimester of pregnancy may expose an infant to an increased risk of heart malformations. Although the US Food and Drug Administration has issued a warning about the potential link between using SSRI antidepressants during pregnancy and an increased risk of persistent pulmonary hypertension of the newborn (PPHN), in December 2011, the FDA announced that any link between the two was premature.

Other birth defects reportedly linked to SNRIs and SSRIs:

Effexor is another SNRI medication. It is manufactured by Wyeth and used to treat major depression and other mood disorders.

If you or a loved one has suffered damages in this case, please click the link below and your complaint will be sent to a Pristiq lawyer who may evaluate your claim at no cost or obligation.
Please click here for a free evaluation of your Pristiq claim
Last updated on Apr-4-12

With a flurry of news about antidepressant side effects in the last month, women who are taking Pristiq antidepressant may be concerned about whether or not they are also at an increased risk of Pristiq side effects. The class of drugs that Pristiq belongs to, known as serotonin-norepinephrine reuptake inhibitors (SNRI medications), has been linked in some studies to certain health issues, but whether there is a risk of Pristiq birth defects remains to be seen. READ MORE
READ MORE Birth Injury and Birth Defect Settlements and Legal News
READ MORE Drugs/Medical Settlements and Legal News