Send your Ohio Medical Malpractice claim to a lawyer who will review your claim at NO COST or obligation.
GET LEGAL HELP NOW 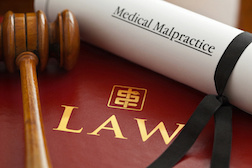 Patients who wish to make a medical malpractice claim must show:

Patients will likely be required to provide medical reports and diagnoses, testimony from experts, medical files and other related documents, and physical evidence to support their medical malpractice claims. Ohio Medical Malpractice lawsuits can be filed for a number of reasons, including:

Several different types of damages may apply in an Ohio malpractice case. Some of these damages have caps, which limit the amount a patient may collect.


In the state of Ohio the filing of a notice of intent to sue is allowed but not required before filing a medical malpractice lawsuit. A notice of intent to sue is served upon a potential defendant doctor and filed with the court of record, and gives the potential plaintiff 180 days in which to research and prepare their case before filing. It also pauses, or tolls, the statute of limitations during the notice period.

All medical malpractice cases filed in Ohio must be supported by an affidavit of merit executed by an appropriate expert witness. Such an expert must be licensed to practice medicine in any state and must focus three-quarters of his or her professional time to the active clinical practice of medicine.

A medical malpractice case in Ohio has a one-year statute of limitations, which starts to run when either the injury is (or reasonably should have been) discovered or when the doctor/patient relationship for the condition in question ends, whichever comes later. Regardless of when the injury occurred or was discovered or when the doctor/patient relationship ended, all medical malpractice cases must be filed within four years in Ohio.

Statute of Repose As well as the Statute of Limitations, Ohio has a statute of repose that applies to claims arising out of acts or omissions on or after April 11, 2003. It specifically applies to cases involving either a foreign object left in the body or a claim that was discovered after three years. In those cases, a plaintiff has one full year from discovery of the foreign object or injury, even if that one full year would put the plaintiff outside the normal four-year window.

Wrongful death arising from medical malpractice is a separate action in Ohio and may be filed within two years of the decedent’s passing, even if the malpractice case is time-barred.

The family and estate of the late Michael McNew, aged 38, received $1.7 million to settle a medical negligence and wrongful-death lawsuit. The suit alleged McNew died in 2009 after failing to receive a proper diagnosis at Ohio State's Stoneridge Medical Center where he was treated for severe rectal pain. Missed diagnosis is the most common type of Medical Malpractice Claim.

The second lawsuit filed by Briyn Huff alleged that air was allowed in to tubing connected to a catheter during spinal surgery in 2013 at Wexner Medical Center, allowing air to enter his circulatory system and cause an embolism. Huff claimed to have suffered heart attacks, brain and spine strokes, vision problems and numbness as a result of the embolism.

A lawsuit was filed against Cleveland Clinic by the clinic neurosurgeon Dr Xiao Di when a surgical error caused permanent damage to his left eye, and resulted in his inability to operate and the loss of his job. Dr Di was performing surgery in 2011 when bone fragments flew into his eye. Ophthalmologist Dr. Andrew Esposito – the surgeon who worked on Dr Di and was one of his colleagues at the Clinic— tore an irreparable hole in the iris of the eye when operating on Dr. Di. The suit resulted in a $7.7 million verdict for Dr Di in 2014 for pain and suffering, loss of consortium and for lost wages.

A jury awarded $6.5 million to Diana Southard and her two adult daughters. They filed a wrongful death lawsuit when Diana placed her 62-year-old husband, who was disabled since 1984 by an aneurysm that left him with severe cognitive deficits, in an assisted care facility for two weeks. She left explicit instructions regarding his need for monitoring of adequate fluid intake but her instructions were disregarded, and her husband died shortly after discharge from the facility due to severe dehydration and renal failure.

If you or a loved one has suffered similar damages or injuries, please fill in our form and your complaint will be sent to a lawyer who may evaluate your claim at no cost or obligation.
Please click here for a free evaluation of your Ohio Medical Malpractice claim
Last updated on Mar-6-17

Posted by
Dr. Ruth Thompson-Miller
on December 13, 2017
I was misdiagnosed with Erythema Multiforme in July of 2016 due to prescribed medicine. After I went to critical care in Beavercreek, Ohio, I was prescribed Bactrim which made the
illness worse. I lost my job due to complications from the illness.
Posted by
Gail Wilkerson
on March 10, 2017
Where can I find a Similar Action in California.
I went into Surgery and came out worse.