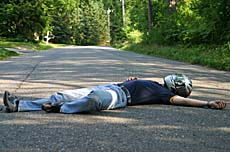 Is Florida the most dangerous state to ride a motorcycle in?

Motorcycles are a favored way to see the sights in the warm, sunny state of Florida. The thrill of riding down the road with the wind in your hair and the freedom of not being confined to a vehicle makes motorcycles an extremely tempting form of transportation. Along with the thrill comes risk, however. Riding a motorcycle can also be a dangerous way to travel. Oftentimes, large trucks and other motorists may not see a motorcyclist until it is too late. The risk of a motorcycle accident can be significant. READ MORE
Erik Abrahamson: Personal Injury Lawyer Spotlight

With over 100 years of combined experience, Abrahamson & Uiterwyk handles virtually every type of personal injury claim—no case is too big or too small. Mr. Abrahamson prides himself on offering professional and compassionate representation to all clients, regardless of their potential case value.   READ MORE
Harley Davidson Brake Failure Subject of NHTSA Investigation

Santa Clara,CA: Harley Davidson Motorcycles is the focus of a safety investigation by The National Highway Traffic Safety Administration (NHTSA). The agency has just announced it will launch an investigation into reports that some Harley-Davidson Inc, motorcycles have defective brakes. READ MORE