Plaintiffs who have filed Kentucky medical malpractice lawsuits allege doctors and medical professionals in Kentucky have in some way failed to meet an acceptable standard of care when providing medical services to patients. Kentucky medical malpractice claims include allegations of medical negligence against doctors, health care providers, and organizations who may be involved in harm against patients.

Send your Kentucky Medical Malpractice claim to a lawyer who will review your claim at NO COST or obligation.
GET LEGAL HELP NOW

To make a Kentucky medical malpractice claim, the patient must show:

Patients who believe they have a medical malpractice claim against a doctor, other health care provider, or health care organization will likely need to provide medical reports, expert testimony, supporting documentation, and physical evidence as part of their claim. 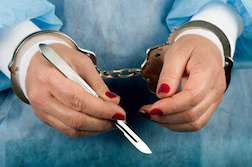 Kentucky has a short statute of limitations for filing a medical malpractice lawsuit. In Kentucky patients have one year after the harm occurred or should reasonably have been discovered. If the discovery of harm does not happen immediately, patients have until five years from the date of the alleged negligent act or omission to file a lawsuit. If the discovery of harm happens after five years have passed from the negligent act or omission, the patient may not be able to bring a lawsuit.

Children have until one year after they turn 18 to file a lawsuit for medical malpractice.

Kentucky currently does not have any laws limiting the amount patients can recover in a medical malpractice lawsuit.

In one Kentucky medical malpractice lawsuit, the family of a man who died of heart disease and complications from an ulcer was awarded $1.45 million punitive damages. James Milford Gray was uninsured and paraplegic when he reportedly sought treatment at St. Joseph Hospital and was given medication, but lab tests and x-rays that were ordered were not actually conducted. Gray was discharged from hospital twice—and refused admission once—without receiving proper treatment and later died. The hospital involved appealed the decision but Kentucky's Court of Appeals affirmed the decision. In 2016, Kentucky's Supreme Court upheld the $1.45 million award. The hospital has said it is confident it provided appropriate care to Gray.

If you or a loved one has suffered similar damages or injuries, please click the link below and your complaint will be sent to a lawyer who may evaluate your claim at no cost or obligation.
Please click here for a free evaluation of your Kentucky Medical Malpractice claim
Last updated on Apr-27-20