Were you looking for Medical Malpractice lawsuits?

Illinois medical malpractice claims are made against doctors or other healthcare professionals or organizations whose standard of care fails to meet an acceptable level. When the standard of care falls and a patient suffers harm as a result, an Illinois medical malpractice lawsuit may be filed against the doctor, health care provider, or institution whose actions caused the harm. Medical Malpractice lawyers typically include claims of medical negligence in hospital malpractice complaints.

Send your Illinois Med Mal claim to a lawyer who will review your claim at NO COST or obligation.
GET LEGAL HELP NOW 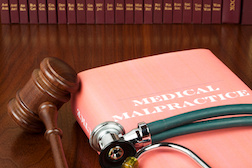 Before 2010 Illinois had a 500,000 cap on non-economic (pain and suffering) damages for cases against a negligent doctor or other health care professional, and a $1 million cap for lawsuits against a hospital or other health care facility. In 2010, after the case of LeBron v. Gottlieb Memorial Hospital, the Supreme Court ruled that damage caps in such cases was unconstitutional. Now there is no cap whatsoever on damages in medical malpractice cases.

Besides pain and suffering, non-economic damages can also include loss of enjoyment, anxiety, lost companionship, scarring, disfigurement, and other negative effects of the plaintiff’s injuries. There are no caps on compensatory damages, which includes money for medical bills and wages lost due to work days missed. Illinois does not allow punitive damages in medical malpractice cases.

Under Illinois laws, a victim of medical malpractice or their attorney must file a “certificate of merit” within 90 days of the filing date, along with the initial complaint, to verify the validity of the malpractice claims. The complaint requires that an expert with at least six years of experience verify the complaint to confirm its validity. Failure to file this certificate could result in a dismissal of the case. But a plaintiff can also file a complaint with an affidavit saying that there was not enough time to fulfill the other requirements if the statute of limitations was close to expiring.

If an injury occurs during surgery (an instrument is left in a surgical cavity, for example) but the patient doesn’t experience any discomfort or pain until three years after that surgery, the statute of limitations begins from the date you first notice any symptoms. However, a four-year deadline runs for all medical malpractice injuries, regardless of when the injury was first discovered.

Ilinois has a special statute of limitations for persons who are minors at the time the medical malpractice occurred. Anyone under the age of 18 has up to eight (8) years to file a lawsuit after the injury occurs, as long as the suit is filed before the patient turns 22.

Here are the basic laws for Illinois Medical Malpractice Statute of Limitations.

In 2015 the family of an 84-year-old woman was awarded more than $1.1 million dollars after she sustained a broken ankle and underwent surgery. After surgery her doctor took her off Coumadin but failed to place her back on the drug thinner. The negligent action caused her to be at an increased risk of embolic stroke.

In 2014 a family won a $3 million settlement in a negligence lawsuit. Their mother died from respiratory failure, allegedly after a nurse improperly turned their mother for her bath and failed to properly secure and protect their mother’s airway.

!n 2009 a wrongful death suit was settled for $1.25 million. The family of the deceased man claimed that a radiologist treated the man negligently and failed to identify a hemorrhage and immediately notify the man’s primary treating physician. Missed diagnosis is the most common type of Medical Malpractice Claim.

If you or a loved one has suffered similar damages or injuries, please click the link below and your complaint will be sent to a lawyer who may evaluate your claim at no cost or obligation.
Please click here for a free evaluation of your Illinois Med Mal claim
Last updated on Apr-27-20

Posted by
Charlene Harris
on July 15, 2017
I was just in hospital on 7-12 - 2017 at 7 am an the doctor at St. Bernard hospital on call in emergency room was rude he ask why I'm here what I want them to do for me I have a history of chronic pain he also Said he don't know what he treating an he have all my medical records from the past visit the way I was treated I felt suicidal cause I didn't have any drugs addiction to treat marijuana for relaxation of my nerve pain deep chronic pain
Posted by
Rebecca Zarzecki
on October 29, 2016
Epidurals have caused Arachnoiditis in my spine. My health is detiorating daily. Please advise.