Radon, the second leading cause of lung cancer after smoking, may be leaking from your countertops, if you have granite. According to recent news reports, more and more concerned consumers and radon inspectors are contacting the environmental protection agency with radon measurements several times higher than those considered to be acceptable background levels. The radon is emanating from the granite.

Send your Granite Countertop Radon Emissions claim to a lawyer who will review your claim at NO COST or obligation.
GET LEGAL HELP NOW

Researchers currently studying the most commonly used granite in kitchen countertops have found that all the 55 samples they've tested emit radon radiation at higher than background levels. The samples were collected from US fabricators and wholesalers. 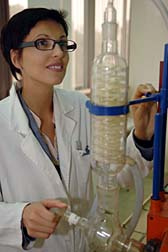 Radon is a radioactive gas that naturally occurs from traces of uranium in soil and rock. It can be found at varying levels around the world. In outdoor air, radon is present in low concentrations. However, in indoor air or enclosed spaces, radon can pose a long-term health risk because the levels can increase.

The Environmental Protection Agency (EPA) has stated that homeowners need to be concerned if the radon gas levels in their homes exceed 4 picocuries per litre of air. Some granite countertops do in fact let off far more than that with reports as high as 100 picocuries per litre. Consequently, the U.S. Surgeon General and EPA recommend that all homes be tested.

Following that advice, four counties in central Nebraska recently sent out test kits to its residents. Amazingly, 75 percent of the homes in those locations were found to have radon levels higher than 4 picocuries per liter. In Adams County the average level was nearly 9 picocuries, considerably higher than levels considered safe.


The Risk of Living with Radon

As radon gas decays it turns into radioactive particles that can get trapped in the lungs just from breathing. As the particles continue to break down, they release small bursts of energy. This can damage lung tissue and lead to lung cancer over the course of your lifetime. The amount of time between exposure and the onset of the disease may be many years.

Like other environmental pollutants, there is some uncertainty about the magnitude of radon health risks. However, the EPA states that they know more about radon risks than risks from most other cancer-causing substances, because estimates of radon risks are based on studies of cancer in humans, specifically underground miners. "Scientists are more certain about risks from radon than risks from most other cancer-causing substances," they state.


Exposure to Radon And Lung Cancer

If you or a loved one has suffered ill health effects, injury or damages from radon exposure, please click the link below to send your complaint to a lawyer to evaluate your claim at no cost or obligation.
Please click here for a free evaluation of your Granite Countertop Radon Emissions claim
Last updated on Nov-6-08

With people becoming increasingly concerned about granite countertop radon emissions, some organizations are taking matters into their own hands, offering to conduct tests to determine radon exposure in homes. Meanwhile, the debate rages on as to whether people who have granite countertops in their homes are exposed to unsafe levels of radon.READ MORE
Al Gerhart of the Solid Surface Alliance discusses Granite Countertops

Thomas S. (not his real name) and his family were probably excited the day they moved into their new home. Unfortunately, within two years of moving in, all family members suffered from strange medical problems. Thomas believes that the health problems are related to excess radon in his home, emitting from granite countertops and other furnishings. However, he says that no one believes him.READ MORE

Posted by
Illinois
on October 5, 2008
For starters, just like in the article, the padding on my feet has become very thin. It became so painful, I was almost in tears and it cost me two jobs because I could not concentrate with the VERY EXTREME pain in my feet which the foot doctor could find no reason for. Friends would come over and say they were tired (and so were we all of the time) so we asked the fire department to measure the oxygen levels and other gases. They said all of the levels were fine.