Send your GM Faulty Ignition claim to a lawyer who will review your claim at NO COST or obligation.
GET LEGAL HELP NOW

In 2014, GM, which filed for bankruptcy in 2009 and emerged as a new company, began recalling several car makes and models with faulty ignition switches and continued to increase the scale of the recall, according to ConsumerSafety.org. "Ultimately, more than 30 million cars have been recalled to date," that organization reported.

In 2014, GM acknowledged that the automaker had failed to respond to problems with the ignition switch in the Chevrolet Cobalt and Saturn Ion and that GM engineers were aware of the switch's problems for years before General Motors began any recalls of affected models.

"Eventually, GM paid $900 million to settle a federal criminal investigation and set aside $594.5 million for a fund to compensate victims of switch-related crashes," according to the New York Times. 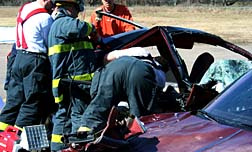 The GM ignition switch defect has been linked to "at least 124 deaths and 275 injuries," according to The Washington Post.

In GM CEO Mary Barra's 2016 deposition testimony on a case brought by a Houston family for a fatal car crash allegedly caused by a defective ignition switch, Barra testified that GM engineers in 2004 and 2005 misdiagnosed the flawed ignition switch "as a customer satisfaction issue and not a safety issue," according to The Washington Post.

According to the article: "A series of mistakes were made over a period of time that caused the ignition-switch defect,’’ Barra testified. “This had tragic consequences.’’

In April 2017, the US Supreme Court declined to consider an appeal from General Motors in which the automaker asked the court to review a 2016 federal court ruling that, despite GM's 2009 bankruptcy and emergence as a new company, the automaker was liable for injuries and deaths that occurred prior to the bankruptcy.

According to the New York Times:"Over the last few years General Motors has paid out more than $2 billion in fines, penalties and settlements related to faulty ignition switches that plagued many of its vehicles for close to a decade, a flaw that led to vast recalls and at least 124 deaths.

"But the automaker is not yet close to putting the matter behind it and may now face years of additional litigation as a result of the latest legal turn in the case."

The US Supreme Court refusal to consider the appeal means that "several hundred remaining unsolved wrongful death and personal injury claims against GM could be sent to state courts for resolution or even trials," according to the New York Times.

General Motors could be exposed to "billions of dollars in additional claims" related to its defective ignition switches as a result of the recent ruling, according to The Detroit News.

Also according to The Detroit News:"A number of injury, wrongful death and economic loss lawsuits have been filed against GM because of the defective switches. The automaker admitted it knew of the defect for years but did not recall the cars for more than a decade. It also paid fines to the National Highway Safety Administration."

"At the end of January, GM said it knew of 100 class action economic harm cases pending against the company in the US and 21 in Canada related to the ignition switch," according to The Detroit News. "It also knew of 284 cases pending in federal and state courts in the US and 14 in Canada alleging injury or death due to the defect."

If you or a loved one has suffered similar damages or injuries, please click the link below and your complaint will be sent to a lawyer who may evaluate your claim at no cost or obligation.
Please click here for a free evaluation of your GM Faulty Ignition claim
Last updated on Feb-7-20

Washington, DC: In a potentially crushing blow to General Motors, the US Supreme Court has declined to consider an appeal from the automaker asking for a legal shield to protect GM from lawsuits related to faulty ignition switches on its vehicles.READ MORE
Plaintiffs Give Up on GM Faulty Ignition Switch Fund, Look to Courts Instead

A division has formed between plaintiffs trying or having tried to access a compensation fund established by General Motors for victims of faulty GM ignition switches, and those plaintiffs who have either given up on the fund, don’t qualify, or at the end of the day feel they would fare better with the courts. The dividing of the camps adds to the drama over the faulty ignition switches that plaintiffs allege GM knew about and tried to hide. In the end, many plaintiffs are bailing on the GM Faulty Ignition Switch Fund, opting to face the courts on their own.READ MORE
Consequences of GM Recall Extended As Guilty Plea in Fatal Crash Overturned

The numbers involved in the GM recall tell a lot of the story. Millions of cars subjected to the GM ignition recall, 36 deaths, many more injured. These are all allegedly the result of an ignition switch that can inadvertently switch out of the “on” position to the “off” or “accessory” position. But the consequences extend beyond those numbers, to one woman who was found guilty of causing a crash that killed her fiancé, and has spent years blaming herself for the accident.READ MORE