Erb's Palsy is a paralysis of the arm caused by injury to the upper group of the arm's main nerves (specifically, spinal roots C5-C7 ) in the brachial plexus. It is almost always a birth injury, which could result from an abnormal or difficult childbirth or labor. It can also be a result of medical malpractice, such as excessive pulling on the shoulders during delivery, or if the infant's head and neck are pulled toward the side at the same time as the shoulders pass through the birth canal.

Send your Erb's Palsy Birth Injury claim to a lawyer who will review your claim at NO COST or obligation.
GET LEGAL HELP NOW 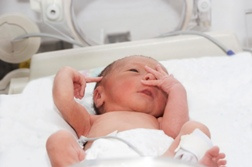 Erb's Palsy is the name for damage that is caused to the nerves. These nerves extend bilaterally from the neck and shoulder area to the upper extremities and are responsible for controlling the muscles in the arms, hands, and fingers. Erb's palsy is most often the result of shoulder dystocia. Shoulder dystocia is a birth complication that occurs when a baby's shoulders get stuck on a mother's pelvic bone. This can result in damage to the nerves of the brachial plexus including stretching, tears, rupture or avulsion of the affected nerves. This can cause limpness, reduced sensation, paralysis, or lack of muscle control in the upper limbs.

Medical malpractice may also take place when a doctor, justifiably anxious about the possibility of the baby suffocating, uses excessive or misdirected force to reposition the baby, tearing nerves and causing Erb's palsy or another brachial plexus palsy. If these medical errors lead to a birth injury such as Erb's palsy, you have the legal right to sue for compensation for your medical bills, your child's pain and your own trauma. 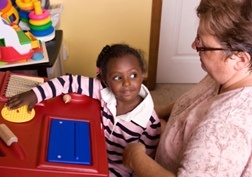 While most cases of Erb's palsy are healed within six to 24 months, according to the American Academy of Family Physicians, about 10 percent of them are lifelong conditions. Those babies will grow up with limited or no use of that arm, sometimes without feeling and with a limp, atrophied arm that marks them as different from other children. They may need multiple surgeries and physical therapy.

Those babies with Erb's palsy who heal within their first years of life usually still need extensive physical therapy to keep their joints alive and flexible. Authorities agree that treatment within the first year of an affected child's life increases his or her chances of recovery. Furthermore, the baby's family may feel extremely anxious about the possibility of a permanent disability for their child. 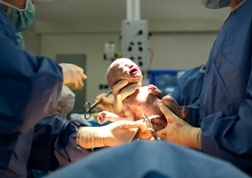 About 1 or 2 babies in 1,000 suffer brachial plexus injuries at birth, and about 1 in 10 of these babies need treatment. Unfortunately, medical mistakes do occur and in the case of shoulder dystocia, the mistakes can be lasting with conditions such as Erb's Palsy. 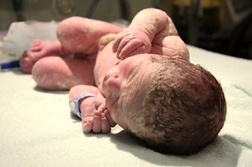 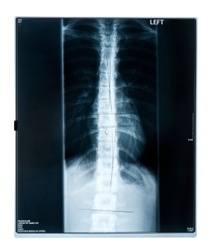 Symptoms of Erb's Palsy are usually very obvious. A baby suffering from Erb's Palsy can be seen with the affected arm laying by their side and an extended elbow devoid of movement. The injuries that are associated to Erb's palsy are the neck, clavicle, shoulder, and arm. Some precautions should be used with children with brachial plexus injuries are shoulder or elbow dislocation, a frozen shoulder, soft tissue or joint contractures. Lifting a child with Erb's Palsy from under the armpits should always be avoided.

Treatment for Erb's Palsy generally consists of daily exercise and physical therapy to improve functionality of joints and muscles. In about 20 percent of the cases, babies born with Erb's Palsy will greatly benefit from surgery between the ages of 5 and 12 months. Infants with brachial plexus palsy can benefit from surgical procedures to increase their arm functions. Since most children with Erb's Palsy have damage to multiple nerves of the brachial plexus, more than one procedure, preformed by a pediatric neurosurgeon, may be necessary.

Erb's Palsy affects three out of every 2,000 live births in the US. According to medical writer Carrie Schmitt Harrison, the condition, which is typified by paralysis of the arm and stems from nerve damage, is more common than Down syndrome and muscular dystrophy. Yet there is a great deal of incorrect information out there.READ MORE
Erb's Palsy: reports of negligence at birth

Posted by
Erin Kasper
on August 18, 2015
ok so my son is 20 months im just wandering if i could still collect compinsation for his erbs palsy
Posted by
California
on March 7, 2008
My son has been teased and picked on because he doesn't have full range of motion in his affected shoulder and his arm does not straighten all the way.
Posted by
California
on December 10, 2007
My son suffered shoulder dystocia and some left side nerve damage.
Result in severe speech delay and my son(6yr.) will come home crying because his friends can't understand him. I had a 3D ultrasound with proof of his size and I was not taken seriously.
Posted by
Michigan
on August 3, 2007
My daughter has suffered and still is suffering pain everyday from this erbs palsy. It has affected her left eye she has a limp left arm she can not wipe herself. I clean and bath her everyday she is in special ed she can't read and she writes like a preschool at age 9, she also has developed scrolios in her back she always complainting about pain in her back and her neck and all the doctor have gave her is pain pills. Her left arm sticks out as if it is hanging from a piece of thread. It seems to me that she need to see a surgery I was also told, that but I can't get no honest answer about my child she has not had a fair chance at this and i have to to this for the rest of her life.