Although bicycling can be a healthy way of getting around—and getting exercise—bicycle accidents are not uncommon. A bike accident can cause serious permanent injuries, including neck and spine injuries and traumatic brain damage. Some bicycle crash injuries can be catastrophic and life-threatening.

Send your Bicycle Crash Injury claim to a lawyer who will review your claim at NO COST or obligation.
GET LEGAL HELP NOW 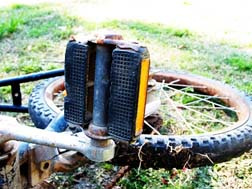 According to the 2008 safety data from the NHTSA (National Highway Traffic Safety Administration), (2008 is the most recent safety data available) from 1932 through 2008, approximately 53,000 bicyclists died in traffic accidents in the US. In 2008, 716 bicyclists were killed and approximately 52,000 were injured. Of those killed, 13 percent were children aged 16 and younger. That same age group accounted for 25 percent of those injured. 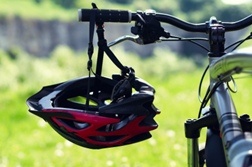 According to the NHTSA (2008), 21 states, the District of Columbia and approximately 150 municipal localities have age-specific bicycle helmet laws. Fourteen states have no state or local helmet laws.

On public roadways, vehicle codes mandate that bicyclists follow the law, just like other motorists. Motorists should allow a minimum of three feet of clearance when passing a bicyclist on the road, yield to cyclists at intersections and watch for cyclists when making turns.

Failure of bicycle frames and component parts are not uncommon. Even when traveling at slow speeds the fracture of a frame or critical component can cause serious injury. Often at fault is a defect with composite forks, aluminum frames, bolts, and other bicycle design and manufacturing defects.

In 2009, a cyclist was awarded $722,800 in damages for injuries sustained in a defective product bike accident. The man alleged he was injured when the front fork on his bicycle broke. The plaintiff fell and sustained severe fractures in the accident.

If you or a loved one has suffered an injury as a result of a bike accident, please click the link below to send your complaint to a lawyer who will evaluate your claim at no cost or obligation.
Please click here for a free evaluation of your Bicycle Crash Injury claim
Last updated on Jun-5-10

The Right To Walk: Why Everyone Should Have Access to Sidewalks and Crosswalks

Take a walk with me. I live in Orlando, one of the most walkable cities in the world—and also one of the most dangerous for pedestrians. In 2021, cars hit more than 150 people on a public road in this city. That's nearly one person every week. And those are just the accidents that happen on public roads. Think about sidewalks and pedestrian or bicyclist hit-and-run cases. I can't count how many times I've almost been hit on a sidewalk and had to jump out of the way. How many times have you done that? READ MORE
40-Year Old Cyclist Killed By Motorist on Cell Phone

A recent bicycle accident has killed a 40-year old cyclist identified as Josh Alper of Santa Cruz. Alper was killed by a motorist on Highway 1 west of Santa Cruz. According to news reports, the driver of a Tesla was headed southbound when he crossed the centerline of the freeway into the northbound shoulder, colliding with Alper, at high speed.The head-on collision killed Alper immediately. This is the second cyclist fatality in Santa Cruz County for 2013. READ MORE
Shimano Disc Brake Calipers Recalled in US and Canada

Consumers in the US and Canada are being advised by Shimano, the US Consumer Product Safety Board and Health Canada to immediately stop using bicycles with recalled Shimano brakes. Shimano has recalled the defective calipers due to reports that the disc brakes can fail, posing a collision hazard. READ MORE